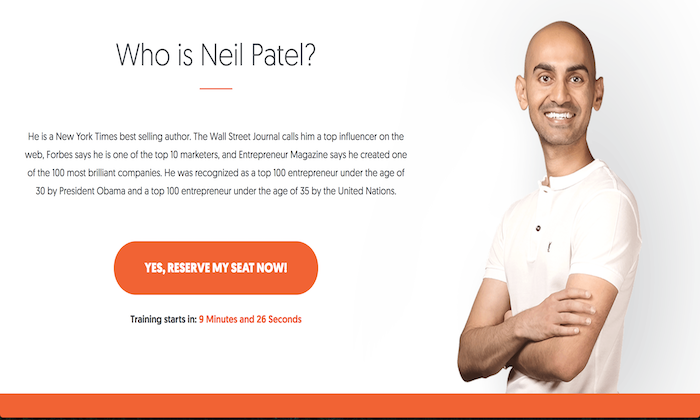 How to Create Best CTAs To Increase Your Conversions

CTAs that don’t work are CTAs that abandon that concept. Your marketing efforts worked because you offered value. CTAs need to stand out, one way or another. Instead, your CTAs should say things like “Download my marketing blueprint” or “sign-up for 3 free months.” The consumer should be able to decide whether or not they’re interested just by looking at your button. Not only does Uber have to appeal to the people who are considering signing up to use their service, but they also have to draw in potential drivers too! Still, Spotify manages to appeal to the needs of their entire user base, while clearly defining the next step and presenting their CTA front and center. Their CTA is easy to identify, they have a clearly defined next step, and their presentation works perfectly with the aesthetic they’ve created. Appeal to the needs of your consumer. Make sure to consider potential objections. What’s important to keep in mind is that your CTAs should always operate from the perspective of “what do I have to give the consumer?” As long as your CTAs all revolve around the concept of offering as much value as possible, you’ll be on the path toward increasing conversions.

The 80/20 Guide to Troubleshooting Your Onsite SEO
The best quotes of “Business Model Generation: A Handbook for Visionaries, Game Changers, and Challengers”
How to Make Money Blogging in 2019

Do you want increased conversions?

That’s a trick question. I know you do.

Okay, serious question. On a scale of 1 to 10, how strong are your calls to action?

If the answer is anything under 10, listen up.

The call to action (CTA) can be seen as the bridge between marketing and sales.

Everything that you’ve done, all the branding and engagement, was so that people would eventually go from potential customer to paying customer.

Businesses use the CTA as a tool to guide the consumer into the sales funnel.

There’s just one minor issue. A flimsy CTA can compromise everything that you worked so hard to achieve with your marketing efforts.

With so much riding on them, it can be challenging to decide exactly what kind of CTA you should use.

But don’t worry, I’ve got you covered.

I happen to know a thing or two about CTAs.

Of course, there are plenty of great CTA examples out there right now that you can learn from.

That’s why today, we’re going to go down the list of some of my favorite CTAs and break down exactly why they work so well.

But first, let’s go over some of the basic best practices you need to know to develop the best CTAs for your business.

The basics of effective CTAs

The interesting thing about CTAs is that everyone seems to have their own style and approach to them.

If you asked 10 marketing experts what the most important component of a successful CTA was, you’d get 10 different answers.

That being said, this article is going to make a lot more sense if we’re all on the same page.

So in the spirit of keeping things simple, I’m going to describe what I’ve consistently seen in the most effective CTAs being used today.

All of your marketing efforts have revolved around one core concept: Providing value, either through education or entertainment.

CTAs that don’t work are CTAs that abandon that concept.

Remember that going for the sale doesn’t mean you have to throw away all the good will you’ve earned throughout your marketing campaign.

Your marketing efforts worked because you offered value. So, what’s the easiest way to guarantee that your CTA will work?

The more straightforward your point, the better.

You’ve already identified the needs of your audience. As long as your CTA is tailored to those needs, you’ll be on the right path.

If your CTA comes off as self-serving or simply doesn’t meet your core audience’s needs, it won’t resonate with them.

When it comes to the actual practices that pop up consistently in effective CTAs, there are typically three.

As long as those three criteria are met, your CTA has an increased chance of being successful and driving conversions.

Appeal to the consumer’s needs

The average consumer isn’t some unsolvable riddle waiting to be solved.

Which means that, like most people, before they consider actually spending money on a product or service, they need to be sure that their needs will be met.

“What value does this product/service bring me?” Before a consumer makes their decision, that question needs to be answered.

I’m constantly showing you guys the kind of value I bring to the table.

Part of this means determining not only what your users want, but also finding out what they want to avoid.

Handling objections is just part of the sales game. And if you want to increase conversions, you’ll need to address any potential issues and satisfy consumers in the process.

Make your CTA easy to find

When it comes to a implementing a CTA, you’re constantly trying to strike a balance.

You don’t want to overload users with CTAs to the point that they stop taking them seriously.

But the other side of that coin isn’t great either.

You can’t increase conversions with a CTA if no one can see it!

CTAs need to stand out, one way or another.

I’ve discovered that sound can increase conversions when paired with CTAs. It’s a little-used trick to draw the consumer’s attention.

Of course, other strategies work just as well.

Some of you may choose to create a CTA that matches the color scheme you’ve created, which helps visually confirm that the CTA button is directly associated with your brand.

Others may go down the route of choosing a color that provides a stark contrast and stands out, in the hopes that consumers will notice the button immediately.

Both of these options work because they rely on the principle of being easily identifiable.

Having a landing page with a washed-out white CTA button on a white background isn’t going to help increase conversions very much, is it?

Speaking of backgrounds, make sure that you’re presenting your CTA in the best possible light possible.

Backgrounds don’t have to be fancy. But they do have to work.

Your choice in visuals should match the overall aesthetic of your brand.

Guide the consumer to the next stage

Remember what I said earlier about CTAs being the bridge between marketing and sales?

Well, you can’t expect people to cross that bridge unless they’re sure what’s on the other side.

CTAs should be specific and action-driven.

Don’t just tell people to “Download” or “Check this out”.

The consumer should be able to decide whether or not they’re interested just by looking at your button.

As for the details of the design and how you should implement these concepts, let’s take a look at the examples below to understand what exactly drives conversions.

Uber is an interesting place to start because of how expansive their CTA effort has to be.

Not only does Uber have to appeal to the people who are considering signing up to use their service, but they also have to draw in potential drivers too!

Seems like it’d be a difficult thing to pull off.

But take one look at their website and you’ll see that they’ve made it look easy.

From left to right, the tabs say “Ride” and “Drive.”

No matter which you pick, you’re presented with a large image in the background of the website that shows one aspect of the Uber experience.

What’s really impressive is that they decided to incorporate the needs of all their users so effortlessly.

If you’re looking to be a rider, the process is straightforward enough.

If you’re interested in being a driver, you can easily figure out where to go and get there quickly.

There are unique CTAs for each user, but they’re the exact same size and shade of green.

Why? Because both are considered to be equally important.

The CTA designed for potential riders is in the form of a green box on the right side of the screen. It says, “Start riding with Uber.”

The CTA for drivers is similar, with a CTA button on the left side of the screen that says, “Start driving with Uber.”

The visuals are certainly compelling. The CTAs are clearly labeled. And the next steps couldn’t be more clearly defined. As far as I’m concerned, the needs of the audience are definitely being addressed.

How can you tell? First, consider the aesthetics. The blue Facebook CTA is significantly more vibrant and designed to grab my attention, especially with the branded color and logo present.

The email signup may be above it, but it’s been left in a bland white. Not quite as appealing, right?

And that’s no surprise, honestly. For starters,…

How to Optimize Your Social Media Videos for Conversions 0

How to Create Engaging and Meaningful Content on Social Media? 0