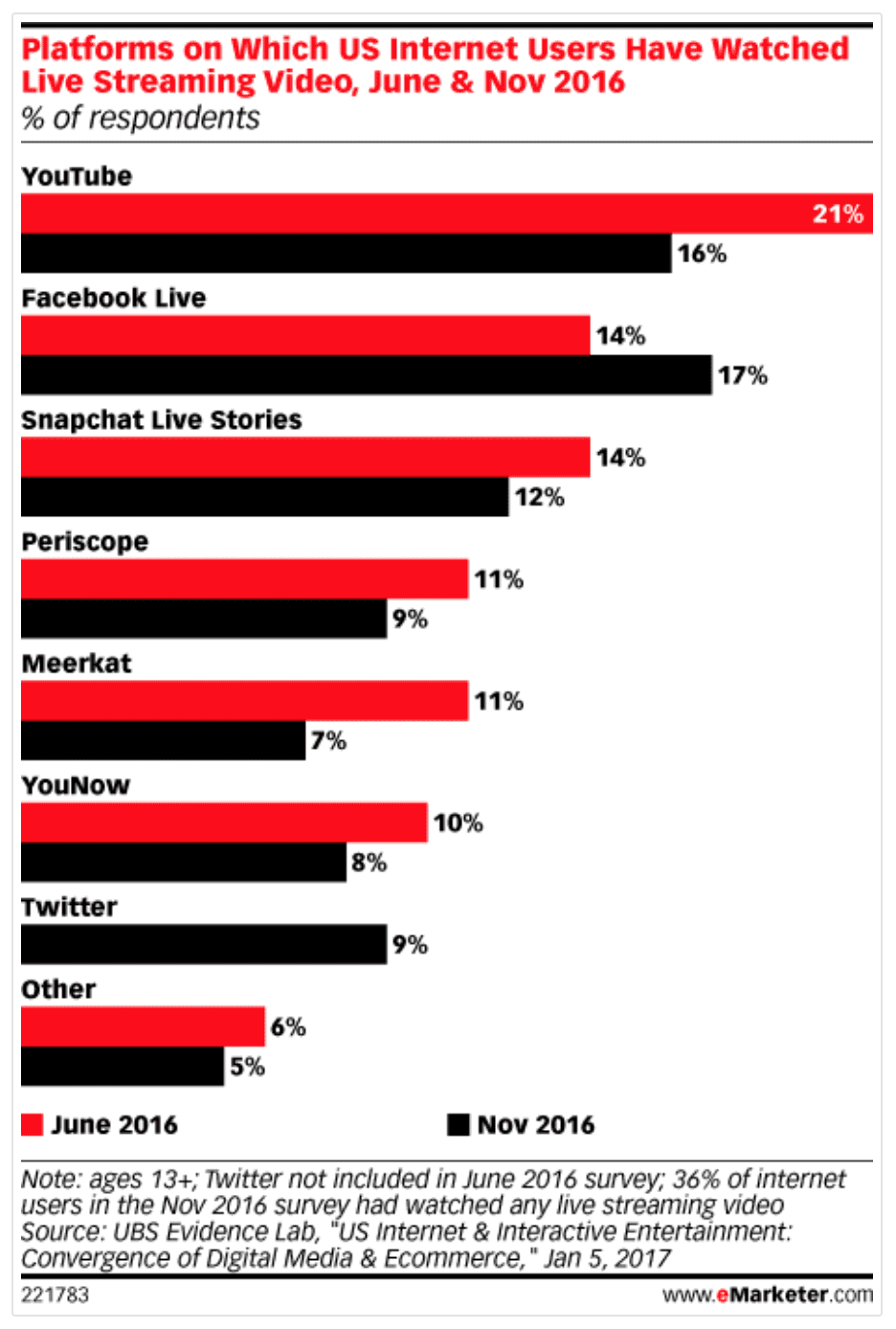 Why Isn’t Anyone Talking About Live Video Anymore? The Current State of Live

Instead, brands seem focused on their overall video strategy … “live” included: 85% of brands posted at least one video last year, and the majority of brands used Facebook, YouTube, and Instagram. There’s even talk of Instagram testing out a co-watching feature on the app, which would be a way to live discover Instagram videos together. Historically, people watching videos on social media will stick with a live video for 3x longer than other videos, so it’s no surprise that social networks continue to keep this feature going. Live video is great for anyone who is just getting started with growing their presence on social media One of the very best features of live video is its visibility in the interface of all the different social networks. Take Instagram, for example. For marketers, the main social networks for live video are the ones you’d expect: Instagram, Facebook, YouTube, and Twitter. This saves your content to the Stories section of the app, where you can share them with your audience. This will give you options to get your livestream started. Many live videos go for 30 minutes-plus. You can do this with posts on Twitter or Facebook, or use the new countdown sticker on Instagram Stories to promote the time.

7 Growth Hacks Every Small Business — Including Yours — Should Know
The Top Social Media Trends In 2017 (And How They Can Help You)
Viral, Sports, and Media Dominated December’s Chart: Top Facebook Publishers December 2018

Live video remains a core feature of the top social networks, but have you noticed that the live video buzz may have cooled?

Why isn’t anyone talking about live video anymore?

How should you be thinking about live video and your social media strategy in 2019?

We believe there are still significant opportunities to use live video to your advantage. This week on the Science of Social Media, we hope to give you some fresh perspectives and ideas on what live video could look like for you and your brand in 2019.

If you think back three years ago to 2016, live video was everywhere.

Facebook Live had just debuted, and you had platforms like Periscope and Meerkat making waves as well. Live video seemed destined to be a huge focus for social media and for marketing strategies.

An emarketer study showed that one in every three Internet users had watched a live video in 2016, and that number was double for the much-coveted millennial demographic. Live video was going to be the future of how we interacted on social media.

What a difference a few years make, right? Live video seems to have gone from front-of-mind to back-of-mind for marketers and for the social networks themselves. Case in point …

And the stats seem to point to a shift as well — or perhaps to a signal that live video never really took off in the way we thought it would. According to the annual State of Social Media report that we conduct at Buffer, 25 percent of brands had posted a live video in 2016, and the number only grew to 30% in 2017. Far from the rocketship growth that people expected.

What’s more, in our latest State of Social study, live video wasn’t even mentioned. Instead, brands seem focused on their overall video strategy … “live” included: 85% of brands posted at least one video last year, and the majority of brands used Facebook, YouTube, and Instagram.

Instead of doubling down on live video in particular, brands now consider live video as one of many different types of video distribution methods. You have live video alongside Stories and video ads and YouTube and so much more.

Video remains one of the most engaging, best converting types of content.

Live video has become one of many tools in your video toolbox.

Almost all of the major social networks have live video in some form. Facebook Live is still going strong, as is Instagram live. Twitter continues to use live video really successfully with its Periscope product.

Video game streaming alone has become a major attraction with the rise of e-sports, and beyond video games there are creators and influencers who have amassed giant viewership numbers for their streams.

There’s even talk of Instagram testing out a co-watching feature on the app, which would be a way to live discover Instagram videos together.

So the live video experience continues to be one that is valuable and in-demand for social network users. It might just end up looking a lot different than the live-everything world we predicted a few years back.

3 Strategic Use Cases for Live Video in 2019

It may be the case that fewer people are talking about live video — it may have never reached the critical mass that everyone predicted, or it may be on the backburner compared to newer social network features and strategies — but it is not gone forever, not by any means.

In fact, live video is thriving for particular niches and strategic use cases.

Historically, people watching videos on social media will stick with a live video…

Social Selling: What it is, Why You Should Care, and How to Do It Right 0