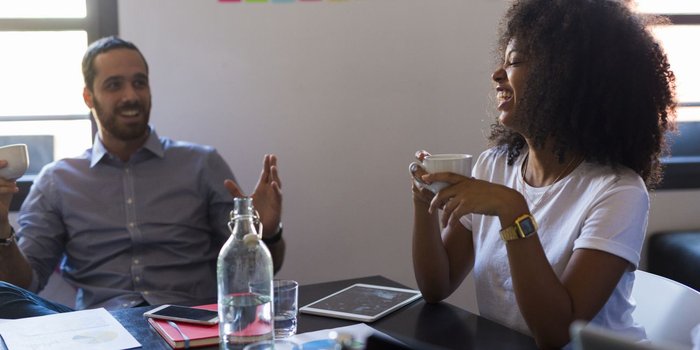 "Small talk is the biggest talk we do." Small talk can be an artful social lubricate that facilitates enhanced conversation, foundational trust as well as long-term personal and business relationships. Most importantly, it is a skill that can be developed and even enjoyed. Everyone's favorite conversation topic is themselves. "What's been your highpoint and low point of the day so far and why?" Each of these questions has the potential to transform an anemic conversational trickle into a meaningful communications cascade. My first journalism professor said, "There is something interesting about everybody and it's a reporter's job to try and find that out." Be fully present and engaged. If you want to be a good reporter, you must use them proportionately." This quote alludes to the fact that the best communicators are active listeners.

The easiest way to be intriguing is listen closely after you’ve asked someone to tell you about themself.

“Small talk is the biggest talk we do.” ~ Susan RoAne, author/keynote speaker

But it doesn’t have to be that way.

Small talk can be an artful social lubricate that facilitates enhanced conversation, foundational trust as well as long-term personal and business relationships. Most importantly, it is a skill that can be developed and even enjoyed.

Anecdotally, the most profitable business opportunities of my corporate and entrepreneurial careers respectively have blossomed from seeds of small talk. For instance, I attended a weekend ecommerce conference in Florida last fall where attendees listened to a parade of speakers during various main stage presentations and breakout sessions. The podium content was solid and useful, but the most profitable interaction I had occurred during a networking mixer at the end of the second day where I happened to meet an unassuming, international shipping agent.

After several minutes of small talk about the event and why each of us chose to attend, it became clear that we could work together since I was looking to export a private label product I had developed. Our small talk quickly dialed into a focused, meaty conversation regarding shipping logistics, VAT requirements, union issues and import fees among a host of other topics.

We spoke for more than two hours straight. After that we exchanged business cards and connected after the conference. We’ve been working together ever since, and I’ve seen a double-digit lift in both gross revenue and margin for that single product, with more products in the exporting queue.

In all honestly, I almost skipped that mixer because I was tired and didn’t want to engage in pedantic small talk. Happily, I did attend and heartily leaned into an evening of innocuous pleasantries. The takeaway of…

Getting to know a #CMWorld 2017 attendee: Olivia Tharp 0