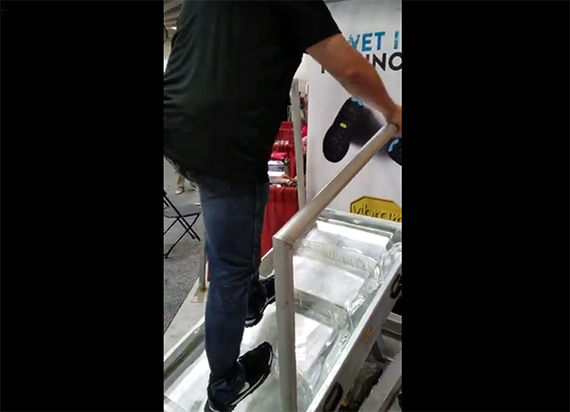 Lessons learned from opening a brick-and-mortar retail store may apply to online merchants, providing insights about promoting products, driving sales, and engaging shoppers. But during the grand opening, I was reminded that sometimes seeing a product in person isn’t enough to sell it. I had an opportunity to try the Arctic Grip sole at a trade show in August. So here is the ecommerce opportunity: Online stores can include an Arctic Grip video — in fact, there is one available on YouTube — that lets the shopper see the value. Live Streaming Drives Sales To help promote store 14’s grand opening, the retailer’s advertising agency scheduled several radio remotes. During the remote on Thursday afternoon, the announcer from a local country radio station had Curt, the store manager, give her a tour of the new store on Facebook Live. Your ecommerce store can use Facebook Live for events, content, and even products. But these gift cards did three important things for the store: Created a sense of reciprocity, Brought in 50 shoppers, Generated sales. I watched one shopper apply his $10 gift card to a $899.99 power tool purchase. Advertising Works During the three-day grand opening event, the new store out sold the chain’s 13 existing stores and its website.

How Do Your Email Engagement Rates Stack Up Against Your Competitors?
5 Ways That Companies are Screwing Up Their eCommerce Growth
How Content Can Ring Up a Better Retail Experience

On November 9 through 11, 2017, I helped open a new brick-and-mortar retail store. The grand opening event took just three days, but it was the culmination of many months of planning and preparation. Its success reminded me of some important retail marketing lessons that apply not just to physical stores but to ecommerce, too.

What follows are four marketing observations from this grand opening event for a retail chain’s 14th physical store.

1. Some Products Don’t Sell Themselves

One of the often-cited advantages of brick-and-mortar retailing is that shoppers can handle the products and feel the material. But during the grand opening, I was reminded that sometimes seeing a product in person isn’t enough to sell it. In fact, ecommerce merchants may have an opportunity when it comes to selling relatively complex products.

Here is an example. At the front of the new store there was a display of winter boots. These boots featured the Vibram Arctic Grip sole, which is a new, engineered sole that sticks to wet, slippery ice.

In the store, however, winter boots equipped with these high-end, sticky soles just looked expensive. I heard a shopper ask her companion, “Why do these boots cost so much?” I interrupted them, showed a video from when I tried the Arctic Grip — it was still on my mobile — and they bought a pair. What had seemed expensive a moment earlier was suddenly worth every penny.

The difference had not been seeing…

Vidyard and Outreach deliver effective sales videos where you work 0