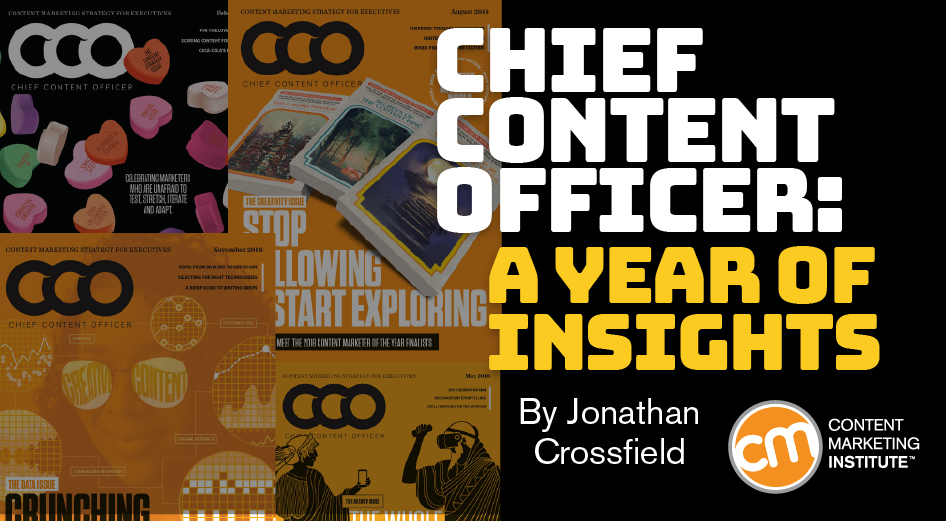 (Blog editor’s response: Sorry, we use that comma here. “VR is a popular buzzword, but as far as everyone having a headset … we’re not quite there,” he said. AR/VR may not be everyone’s reality just yet, but it has certainly become enough of a reality for some brands to create powerful new experiences for their audiences and consumers. Every article concluded with a series of options to determine which article to read next and which page to turn to. This article was also the perfect appetizer for his knockout keynote at Content Marketing World, which kept the audience hooked to the end while telling us how to hook an audience to the end. Data crunching or data crunched (November 2018) The November issue delved into data-driven content, with a series of articles that explored data’s changing role at different stages of the content strategy. Beyond the numbers My wrap-up started with Fergal McGovern arguing that most metrics don’t reveal that much about content quality. It ended with Rand Fishkin making a very similar point. Want to make sure you’re one of the first to know when CCO 2.0 arrives on site? He has won awards for his articles on digital marketing and his over-opinionated blog, Atomik Soapbox.

Has it been a whole year already? Well, not really. As I write this it’s still November and as you’re reading this, it’s the third week in December. A lot can happen in that time. But, assuming this ball of rock we live on successfully completes its routine circuit of the sun once more without major incident, it seems as good a time as any to reflect on how much has changed over the previous 12 months.

One of the biggest changes for Chief Content Officer magazine happened at the beginning of 2018. After seven years and 36 issues, Clare McDermott handed the editor’s red pen over to me in an emotional ritual involving arcane incantations, a branding iron, and a pledge to forever cast out the Oxford comma. (Stares hard at the blog editor. Get out of that!) (Blog editor’s response: Sorry, we use that comma here. We can’t afford any penalties resulting from missing commas.)

While I waited for the burning pain from the ritual to subside so I could sit down again, Clare’s final issue in February set a high bar for me to follow.

The theme of content effectiveness – never mind how many people clicked on the content but is it any good – popped up more than a few times across 2018. Fergal McGovern kicked things off in February with an article on the UX of words.

I’m a word nerd, grammar pedant, and clarity zealot in the same way a car mechanic is a pedant about the right and wrong way to connect the flange to the whotsit. (The last sentence is also why I don’t service my own car.) So, Fergal’s article felt like a rallying cry for me and any other writer who has had to argue with stakeholders about why their buzzword bingo content does not sound more “professional.”

Fergal points out that the average U.S. resident reads at a seventh- or eighth-grade level. Before you complain about the education system, a user’s experience isn’t just about reading capability. As he argues, “even highly educated people disengage rather than spend the mental energy to unpack dense, complicated prose.” If you’ve ever struggled to get past the opening paragraphs of an overly formal, dry-as-biscuits white paper, you’ll know what he means.

“While web analytics can show page views, dwell times and usage paths, they won’t reveal issues with the content itself,” he writes. Now that’s a hill I’m willing to die on.

Also in February, Dan Hatch explained How to Train Your Journalist. Disappointingly, his piece wasn’t a low-budget sequel to the popular animated film series about dragons. Instead, Dan described how to overcome the challenges many journalists face when they first start to write on behalf of a brand.

“Journalism is a vocation,” he writes. “It’s also a profession that has a special place in democracy – holding governments, corporations, and individuals accountable.

“Gosh, but that can give you an ego. For some reporters, that can be hard to let go. And what you, as the person employing them, end up with are writers who think they’re too good to be writing the content you’re commissioning.”

Ouch. But before you think Dan is arguing that journalists are prima donnas to be avoided, he provides advice on how to harness a journalist’s nose for a strong story and knack for compelling and highly readable prose.

“They will adjust, I promise. But they might find this uncomfortable to start with – after all, someone who likely isn’t a writer is telling them how to write.”

Changing tools and strategies (May 2018)

The May issue was my first as editor, so I’m incredibly indebted to the rest of the team for helping me to make it such a great one. I still adore the cover by CCO designer Crystal Madrilejos, who has an enviable knack for turning vague, half-baked ideas from me into incredibly striking imagery.

Inside, I interviewed the always fascinating Joe Chernov to get to the bottom of account-based marketing…

5 Ways to Land Your Company in the News 0

Links, the Ranking Factor That Real Estate (and Other) Websites Ignore 0