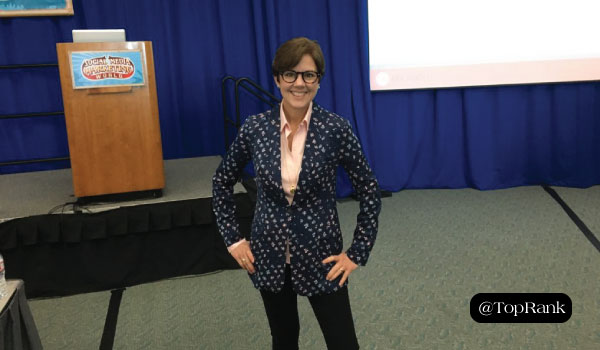 Dumbo was convinced he could only fly while holding a “magic feather.” When he lost the feather mid-flight, he plummeted toward the ground. It wasn’t until he believed he could fly without the feather that he was able to take off again.

Too many would-be content creators are searching for their magic feather–the book, online course, or perfect antique typewriter that will make them a writer. And while they search, they can’t or won’t write.

So Ann began her session at Social Media Marketing World by asking us all to recite a pledge out loud:

“I don’t believe in unicorns, fairies, or Santa. There is no magic feather.”1

Despite the slander against Mr. Claus (who I have on good authority is very real), it’s a crucial first step. You have to know that good writing is a learned skill, not something magically bestowed on those with the right talisman.

You can do it. You can get better at it.

#1: It Starts with Not Writing

At least half of the writing process doesn’t look anything like writing. Now, you may be thinking, “frequently what I’m doing while I’m supposed to be writing is not writing.” That’s not quite what Ann means, though.

“Not writing” means being in idea-gathering mode all the time, when you’re out in the world, bingeing on Netflix, or just daydreaming at work. Writers should gather ideas like squirrels gather nuts–always on the lookout, never passing one up, and stashing them where we can get at them later.

The difference between a productive writing session and a frustrating hour staring at a blank screen is having a stash of ideas to go through. Whether you keep them in a notebook, or a service like Evernote or OneNote, commit to hoarding at least five ideas a day.

When you’re ready to write, snag an idea from your stash and, as Ann puts it, “explore the daylights out of it.” Use tools like BloomBerry, Board Reader, and Buzzsumo to see how people are talking about the idea, so you can develop your own approach.

When you do start to write your first draft, silence your inner critic and focus on getting the words from your brain to the screen. Know that you will revise the work at least once–probably more–before you publish. It’s incredibly freeing to accept that your first draft will be bad. As Ann puts it, “You can’t write well without first writing spectacularly badly.”

That first draft doesn’t have to be a fully-fleshed…

5 Ways to Grow and Build Trust 0

How to Establish Thought Leadership on Emerging Social Platforms 0