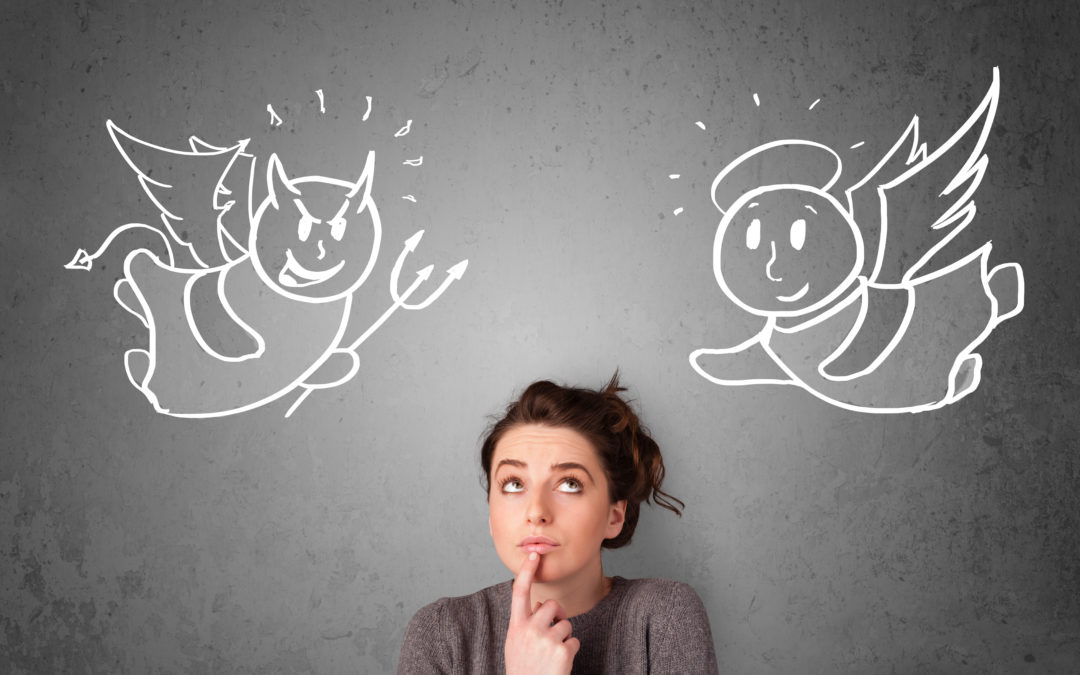 The Strange Way Being “Good” Hurts Your Willpower

Nir’s Note: This guest post is by Paulette Perhach. Paulette writes about finances, psychology, technology, travel, and better living for the likes of The New York Times, Elle, and Slate.

I learned how to respect authority from my father. At the top of a huge water slide at a theme park, he put me, my siblings and cousins in a huge, round raft, then started to get in himself. “No sir, that’s too many,” said the attendant. My father simply replied, “Hup, too late!” Then jumped in and shoved off. We caught air on the bumps, making the ride much more wild than it would have been, had we followed the rules.

Dodging the regulations of anyone with a whistle or a name tag became my favorite game. I avoided homework in sixth grade and, when I had a solid 0 percent in the class at midterm and my parents grounded me for six weeks, I filibustered my way out of my punishment by the second weekend. For years at school, I did the least amount of work possible, then crammed for tests. In high school, I had the best fake ID.

But, the same sass and laziness I used with my home life got me nearly fired from almost every job I had in high school. When I graduated, I stood in a cap and gown, knowing I was supposed to be educated, but that I only looked educated on paper. Drinking too young, as well, had its consequences. I’m lucky nothing terrible happened, but I still wish I hadn’t been so out of control so young.

As an adult, I learned that there are consequences, and then there are Consequences. Little consequences are the human-imposed rules that I can work around, hack, or ignore. They are a parent’s training ground for real life, a boss’s way to make sure the organization runs smoothly, and a government’s standards for building a society. They are human, and so they are flawed and breakable. I find it fun to find the cracks in the system and sneak through.

Consequences with a capital C are life’s natural effects of our human actions. I can sneak past the guard and ignore the sign at the aquarium that says don’t touch the marine life, but that doesn’t mean a turtle won’t bite my finger off. I can smoke cigarettes when no one’s looking and douse myself in perfume to hide the smell, but I can’t sneak a smoking habit past lung cancer. Much later than it should have taken me, I finally understood that discipline is the way you obey the laws of the universe.

Learn 10 willpower “hacks” based on the book, The Willpower Instinct by Kelly McGonigal. Click the button below to get the PDF (#5 on the list is often overlooked):

But still, I don’t think I’ll ever rid myself of the part of me that loves to be bad. There is the Perfect Paulette I know I should be, and want to be. That woman I could be just six months out: more fit, more dedicated to her craft, more chic and not so loud. Less likely to order the steak burrito with sour cream and guac. When I move toward her, by reading, writing, working, yoga-ing, or meditating, I feel “good.” When I cut out to go to a band, join my friends at the beach, or hop in the car for four-day weekend, I feel “bad” in that way that induces guilt, but also, alternately, satisfies my inner Bart Simpson, laughing and thinking, “Suckers.”

The problem arises when the only sucker is me. As an adult, I have no more…

Everything You Need To Know About Web Hosting 0

The 8 Most Popular and Effective Uses of Video Marketing 0

Go All In With Content Marketing or Do Nothing: #CMWorld 0

How Email Marketing Can Help Build Your Brand 0