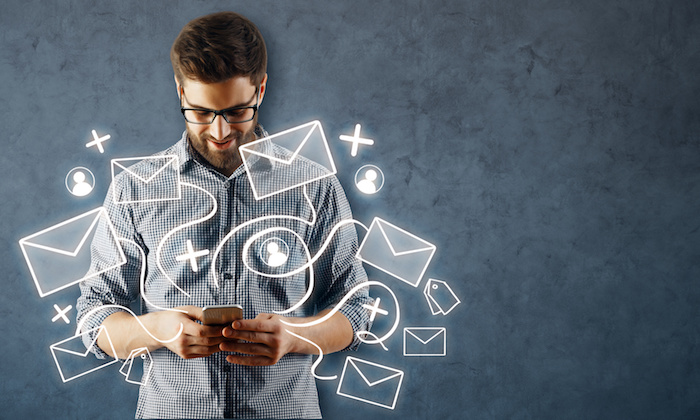 We all want to know the perfect number of emails to send each month. So at what point does email become ‘too much?’ HubSpot found that companies that sent over 30 campaigns per month saw lower email open and click rates. Short subject lines fit perfectly on a mobile screen. You’re not trying to trick people into opening your emails. One of the best ways to do this is by using personal words like “I,” “you,” and “we.” Hillary Clinton’s 2016 presidential campaign used these three words in almost every email they sent. Here’s why I’m emailing you and here’s what you can get. Using words that sound too much like spam or click bait can be dangerous. Your “free consultation” follow-up email might be OK. You can start by sending emails more frequently so that people expect to see you in their inboxes. What’s the best trick you use to increase the number of people opening your emails?

It really can be that simple.

But there are billions of emails sent every day.

So if your email never gets opened and is lost in the sea of unread mail, it’s missing the mark.

People won’t ever realize what you have to offer if they never see your stuff.

But what’s the sweet spot for the number of emails you should be sending each month?

That’s a tough question to answer.

If you send too many, you’ll annoy customers to the point of unsubscribing. However, if you don’t send enough, you won’t get on their radar.

Fortunately, there are a few quick rules of thumb you can use to increase your odds of success.

Here’s how to save your dying email open rates before it’s too late:

Step 1. Are you sending enough emails?

We all want to know the perfect number of emails to send each month.

Each industry is a little different. You might be able to send daily emails if you work in certain industries. Meanwhile, sending emails just twice a month could fly in another industry.

One tool to quickly figure this out is HubSpot’s Email Open Rate Benchmark Tool.

Simply put in your current email open rate and select your industry to see how you compare with the rest of your competition.

So at what point does email become ‘too much?’

Campaigns were defined as targeted, individual emails sent to a portion of the companies’ databases. This wasn’t a generic email blast to everyone.

What was the sweet spot that they found?

Sixteen to thirty email messages a month seemed to generate the best response.

That might seem like a lot on the surface. However, it makes sense when you think about it.

You’re competing with hundreds and thousands of other people to hit your prospect’s inbox.

Of course, your content needs to be awesome. But people need to expect to see it, too.

That only happens if you’re consistently following up and landing in their inboxes on a regular basis.

Let’s find out what other tips and tricks can improve on these numbers.

Over the past few years, open and click rates have remained steady.

That’s despite the volume onslaught email is facing.

Email performance on desktop devices might be slipping, but mobile performance is picking up the slack.

And that’s why short and to-the-point messages work wonders.

Short subject lines fit perfectly on a mobile screen. They force companies to be brief.

The good news is that brevity can also create intrigue. Look at this example from SUITSUPPLY:

This doesn’t look like a classic marketing subject line.

There’s no hyperbole or attention-grabbing statements.

Instead, it uses a vague phrase to catch your eye. It sounds like it’s from a friend at first glance instead of a company.

People are checking email on their phones first.

Consequently, your subject line needs to be written for mobile-first.

Take a look at this Barnes & Noble example:

See how long that is?

That subject line would work fine on a desktop device. However, it would most likely be cut off on a small mobile screen.

Now compare that to this example from TripAdvisor.

You’ll see that it resembles the first one we just saw. It’s simple and brief.

It also sounds like a friend was asking about your trip.

You’re not trying to trick people into opening your emails. You’re just trying to adapt your approach to what people are scanning for on their mobile devices.

Step 3. Focus on value — not promotions

MailChimp analyzed 40 million emails and found that the subject line can have a direct impact on how many people read your email.

Some subject lines drove open rates up to 87%, while others dropped open rates down into the single digits.

Interestingly, they found that some formulas kept working. Except they probably aren’t the formulas you’re thinking of.

None of the classic marketing-style subject lines worked that well. Instead, the best performers usually employed mundane phrases like “Company Newsletter.”

You wouldn’t expect something so basic as this to work well. But apparently, it does!

The value and consistency of this messaging end up paying dividends when customers have a chance to get to know you over time.

Here’s an example from Shutterfly:

Here’s what we can learn from this.

People like to read real emails that are both sent real people and crafted by real people.

They don’t want to feel like they’re constantly harassed or beaten over the head with promotions.

Instead, people care about your industry insights and what benefits they’ll receive from opening your email — besides another discount code, that is.

Regardless of our political beliefs, we can all learn something from this.

She builds trust and actually talks with you, not at you.

Using numbers allows you to hit almost all of these open-rate tricks with one stone.

For example, check out this one from PostMates:

There’s a lot going on here, so let’s break it all down.

Second, they’re saying there’s only “one day left.” That deadline creates urgency to get you to act.

Third, they’re following it up with the simple but effective warning: “It’s your last chance.”

Notice the use of…

The Secret to Selling on Instagram Without Spending a Dime 0

How to Promote Your Mobile App for Free 0