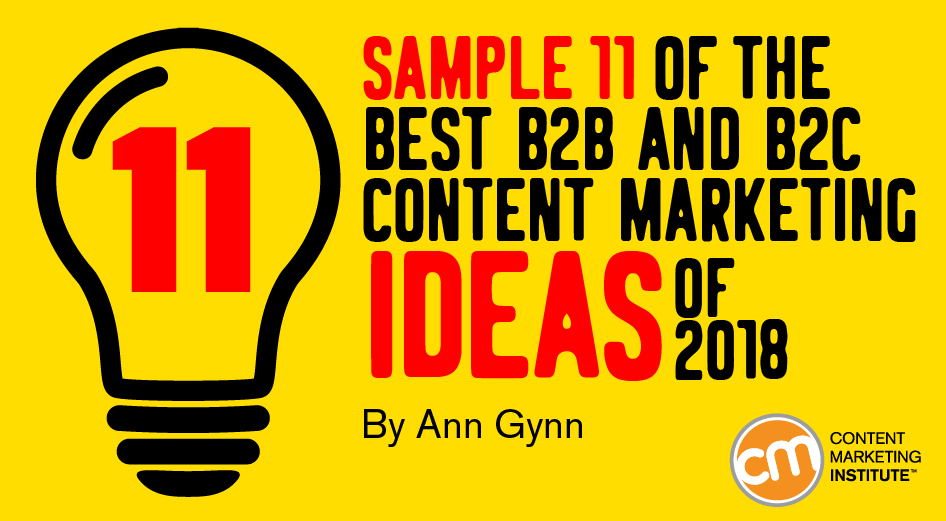 This year, B2B and B2C brands elevated their creativity to inspiring levels. Here are 11 models she shared in her Idea Garage column in 2018: Velcro® entertains to promote trademark (February) Don’t write “velcro.” If you do, the Velcro Brand Companies legal team might burst into song about the importance of using the VELCRO® trademark correctly. The print magazine costs $12 per issue ordered via the website or purchased at Casper’s recently opened brick-and-mortar retail shops, while some copies are distributed to customers on delivery of their Casper mattresses. McDonald’s investigates the mystery of the sauce (August) Fans of the Cartoon Network show Rick and Morty know the story: Last year, an episode of the series referenced a limited-edition Szechuan sauce made by McDonald’s in 1998 to promote the movie Mulan. Sure, but one that’s on brand for a company known for its wacky content. Chester Cheetah narrates this compilation video of images from the Cheetos Vision app: Real people answer life’s questions for Charles Schwab video series (August) Financial services firm Charles Schwab is telling inspiring stories of people who have taken control of their future – reflecting a sentiment at the heart of financial planning. Well, Domino’s is here to do what your local government can’t or won’t: pave the roads. While some might argue kids selling lemonade are as American as apple pie, local governments are cracking down on lemonade stands without the proper permits. A humorous video featuring adorable kids and tough-looking attorneys introduces the Legal-Ade team. Please share in the comments.

A legal team stars in a music video. A cruise line writes romance stories. A fast-food chain creates an investigative podcast into a forgotten food. A mattress company appreciates the value of print.

This year, B2B and B2C brands elevated their creativity to inspiring levels. Natalya Minkovsky found and shared some of the best in each issue of Chief Content Officer magazine.

Here are 11 models she shared in her Idea Garage column in 2018:

Don’t write “velcro.” If you do, the Velcro Brand Companies legal team might burst into song about the importance of using the VELCRO® trademark correctly. No, really. To educate the public, Velcro Brand Companies created a music video in which a cast of lawyers sings about why it’s incorrect to use “velcro” as a noun or a verb (for example, shoes with velcro). In addition to the music video, the educational effort includes behind-the-scenes footage, frequently asked questions, a quiz to test your VELCRO® legal knowledge, and an invitation to join the #dontsayvelcro “movement” on social media. (P.S. If you don’t know if it’s truly VELCRO®, go with hook-and-loop fasteners.)

Update: Later in the year, Velcro® lawyers were back at it – another full production highlighted by a new song including some of the comments the original video received.

Intercontinental turns lifestyle experts into storytellers for its destinations (February)

To help attract customers who have a passion for travel, InterContinental Hotels & Resorts is telling “stories of the InterContinental life” with a video series and podcast. Told by bestselling authors, art experts, top chefs, and pop philosophers, the stories offer glimpses into everyday life in cities where InterContinental has properties – from New York City and London to Beijing.

The stories are grouped into themes: fascination, empathy, connection, sophistication, and worldliness. Brooklyn-based filmmaker and radio producer Bianca Giaever reports from around the world for the podcast, while her short films combine audio recordings with video footage and animated illustrations.

Following in the footsteps of companies such as Airbnb and Away, Moleskine is the latest brand to launch a digital magazine. According to the papermakers at Moleskine, Fold aims to be “a source of inspiration as well as a deep dive into the very meaning and process of inspiration.”

Using stories, interviews, galleries, and guides, Fold explores the process of creativity and showcases work from across the world. The online magazine is accompanied by #unfoldthefold messages on Facebook, Twitter, and Instagram.

Moleskine is no stranger to imaginative extensions of its brand; in 2016, the company opened the Moleskine Café – equal parts coffee shop, retail space, and art gallery – in Milan, where the Italian company is headquartered.

Casper takes print to the mattress (May)

Reading in bed just got more meta with Woolly, a print magazine launched by mattress maker Casper. Dedicated to “a curious exploration of comfort, wellness, and modern life,” the quarterly publication centers on the idea that sleep is the “third pillar of wellness” along with food and fitness.

Created by an in-house editorial team, with help from publishing company McSweeney’s, the content includes personal essays, comedic advice columns, and other stories about resting, relaxing, and recharging. The print magazine costs $12 per issue ordered via the website or purchased at Casper’s recently opened brick-and-mortar retail shops, while some copies are distributed to customers on delivery of their Casper mattresses.

For many readers, romance novels and vacations go hand in hand. And for those who enjoy love stories set on the high seas, Princess Cruises has stepped in with three free original stories. (The original cruise line featured on TV’s Love Boat between 1977 and 1986.) Teaming up with Amazon’s online romance community, Kindle Love Stories, Princess created the…

7 Tips for Building a Career in Marketing 0