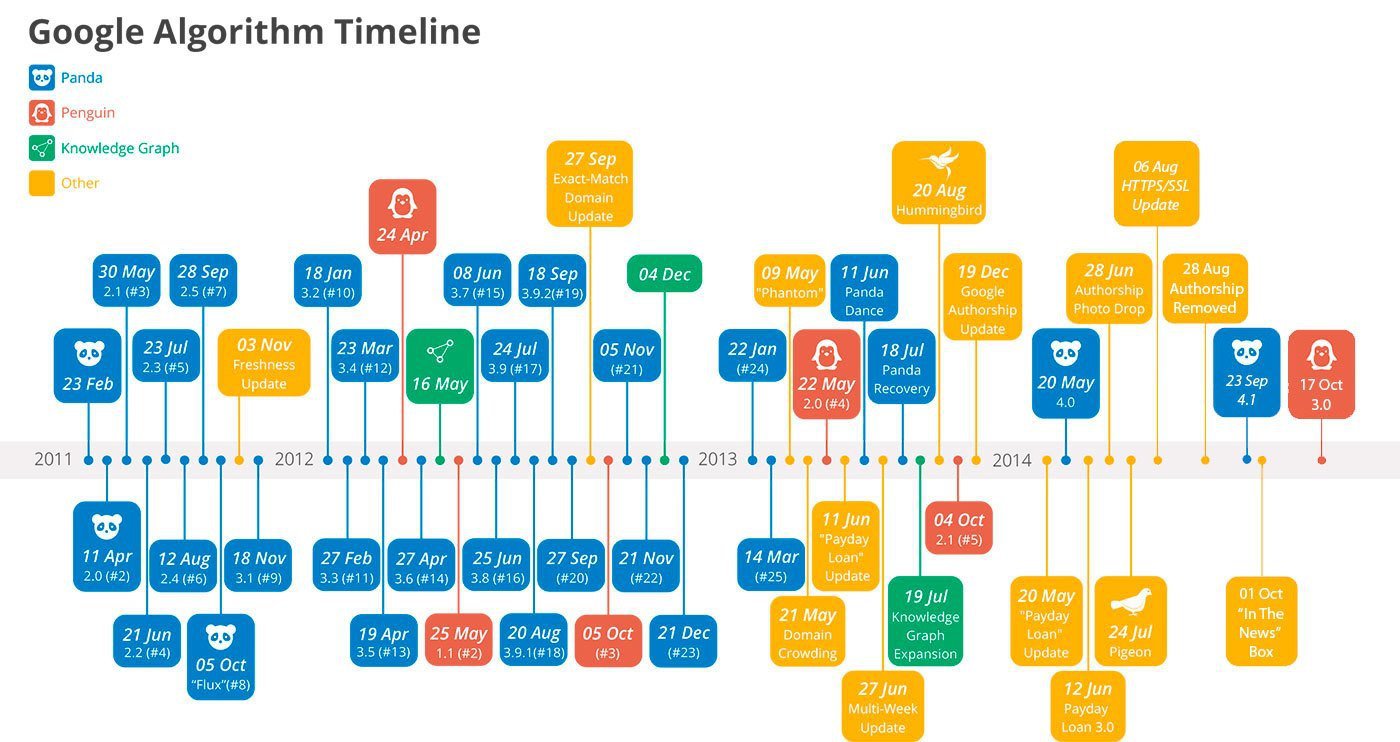 Should You Be Worried About The Next Google Algorithm Change?

According to Link Assistant, there have been nine major updates since 2011. Now we know the frequency of major updates and how much traffic Google sends to the average website. Factor #1 – Your Google traffic If your site is an outlier, where you get only a small percentage of your traffic from Google (say less than 10%), even the most brutal of algorithm changes shouldn’t have a major impact. So you need to make sure your site is protected when the next major update inevitably rolls out. Monitor your link profile The links pointing to your site can make or break you. You can also use the Google Search Console for checking links, which you can learn about in this post. For more on how to protect your site from Google penalties, I suggest reading this post from NeilPatel.com. Conclusion With so many brands heavily depending on Google for their traffic and ultimately sales, I see why so many people worry about algorithm changes. But if you understand Google’s logic and follow SEO best practices, there’s no reason to worry. What’s your experience with algorithm updates in the past?

“Everything changes and nothing stands still.”

In this quote, Heraclitus of Ephesus was referring to life and the fundamental order of the cosmos.

But he might as well be referring to Google’s chronic algorithm updates, even if he was a few centuries early.

Some are major, some are minor.

Some are confirmed, some are unconfirmed.

But Google is cranking them out left and right.

Even on the low end of 500 changes each year, this means 1.36 changes occur every single day.

Google is basically tweaking its algorithm all the time.

Here’s a chart that highlights some of the more serious changes of the past six years:

Most of you don’t even know they happen.

But this constant flux is enough to put a lot of marketers on edge.

Even if you reach a top ranking position for a great keyword, there’s no guarantee you’ll stay there.

A single update could send you plummeting into no man’s land.

I understand this can be a little unnerving.

But is this fear really justified?

Should you be worried about the next Google algorithm change?

In this post, I offer my input on this topic and explain how you can protect your site from incurring Google’s wrath.

The frequency of major updates

Okay, so we’ve established that Google is constantly making adjustments.

It’s how it continues to dominate the search engine market:

But what we really need to know is just how many updates are major.

By major I mean resulting in a serious shakeup where hundreds of thousands, or even millions, of sites are affected.

According to Link Assistant, there have been nine major updates since 2011.

They are as follows:

That means we’ve had 1.5 major updates per year in the last six years.

This isn’t to say minor updates can’t or won’t impact you, but there are only about 1.5 a year that are cause for any real concern.

Average traffic that comes from Google

Kissmetrics performed a study on over 18,000 small to medium e-commerce sites.

They found that “30.5 percent of all traffic was coming from organic searches on Google, Bing, Yahoo and other search engines.”

Considering that Google has 77.43% of the search market, this means that roughly 23.6% of small to medium e-commerce sites’ traffic comes from Google.

I would say that’s significant.

But this is what you can expect on average.

Now we know the frequency of major updates and how much traffic Google sends to the average website.

But is this cause for alarm?

If Google decides to unleash a major update and you get penalized, would it put you in a full-on crisis situation?

The way I look at, there are three different factors you need to examine to determine your risk level.

If your site is an outlier, where you get only a small percentage of your traffic from Google (say less than 10%), even the most brutal of algorithm changes shouldn’t have a major impact.

But if Google is your bread and butter, and you count on it to consistently send highly-qualified leads to your site, you could definitely be in trouble if you’re adversely…

How Takeout Improved Our Candidate Experience: A HubSpot Experiment 0

How to Market to Each Generation on Social Media [Infographic] 0

How to Generate Recurring Sales by Implementing Subscriptions 0