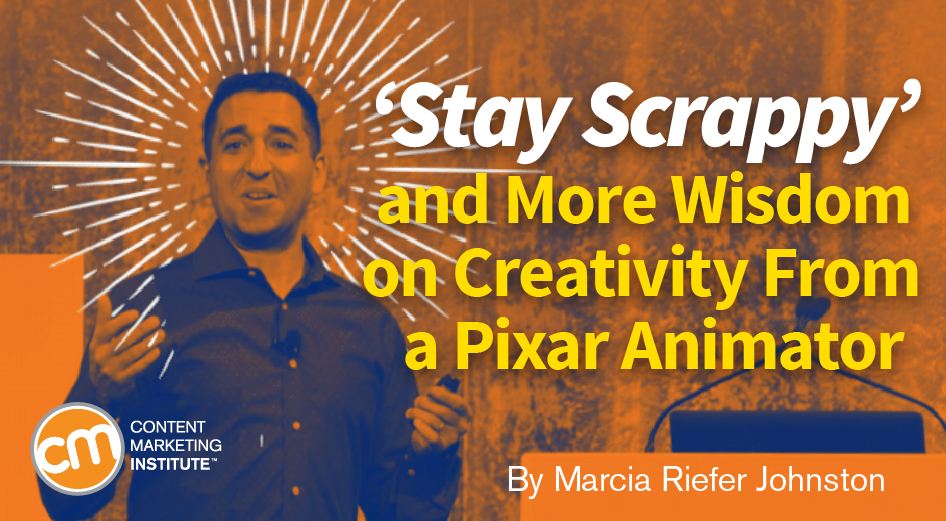 ‘Stay Scrappy’ and More Wisdom on Creativity From a Pixar Animator

In his closing keynote talk at the 2018 Intelligent Content Conference, and in our subsequent interview, animator Andrew encouraged marketing professionals to do what the teams at Pixar do: Build a culture of creativity. The idea was how far could I push things. Sometimes called a story spine, that structure – starting off, building, going down – is not only in most stories but also in most sequences and scenes. If you don’t follow that structure, you may be telling a boring story or a story that goes on too long. Give them two plus two.” CCO: What processes result in stories that work in business? A favorite saying of the Pixar story team sums this up: “Story, no glory.” I loved that saying. CCO: When do you build on a story idea and when do you start over? Andrew: At Pixar, they often ask, “How can we plus it?” You want to build on people’s ideas. CCO: Where can people find inspiration for creative work? Andrew: I get ideas when I’m out and about.

Want to spark innovation, influence perceptions, and inspire people to believe in your organization’s values and brand? Take some tips from 20-year Pixar Animation Studios animator – and recent winner of the Brand Personality Award in Animation from The Asia Pacific Brands Foundation – Andrew Gordon.

What does the co-creator of such movies as Finding Nemo, Monsters Inc., The Incredibles, and Toy Story 3 have to say to marketers? Plenty. As an expert on character and story – and as a consultant to companies around the world, including Salesforce, Pinterest, Deloitte, and Softbank – Andrew knows that stories matter, not just in movies but also in business.

In his closing keynote talk at the 2018 Intelligent Content Conference, and in our subsequent interview, animator Andrew encouraged marketing professionals to do what the teams at Pixar do: Build a culture of creativity.

CCO: How do businesses unwittingly sabotage the creative process?

Andrew: If you’re building a culture of creativity, people need to speak freely. Any organization can quickly get corporate – a little stiff. People hold meetings for meetings’ sake. Candor is missing in the room. These are problems. You have to break that up.

One of the founders of IDEO, Tom Kelley, has said that innovation depends on a willingness to conquer the fear of the “messy unknown.” That’s why you’re more likely to see creativity in places that have that startup vibe.

CCO: How do you keep that startup mentality?

Andrew: You want to stay scrappy, hungry for the next thing, feeling that it’s OK to try things and fail as a way to arrive at a better idea.

In its early days, Pixar was a ratty, grungy place. I loved it. It was what I thought a cartoon studio should be. People played pranks on each other. Everybody’s office was customized. I sat under this big-top tent where we had a train going through so we could deliver cookies to each other.

When Pixar moved from its original scrappy office to the Emeryville (Calif.) offices in 2000, our workplace was suddenly a place where we were afraid to scuff up the floors. The building was very pretty. Many wanted to keep that startup feel, so we pushed on the culture.

For example, I found a hatch in my office wall that led into an air-conditioning vent, which ended in a strange, unused space. I decorated it and started serving drinks in there. I called it the Love Lounge and sent out invitations. I thought I might get fired, but the opposite happened: I got to meet a lot of people. Steve Jobs spoke about this space in his biography, saying that it reminded him of a place he used to hang out at Reed College, but without the acid.

When I moved into another Pixar office I built another secret space, which I called the Lucky Seven Lounge. The idea was how far could I push things. What could I get away with? That was the spirit of Pixar. It’s part of what accounted for us feeling creative and in a relaxed environment.

CCO: What makes a story good – or bad?

Andrew: Many stories have the same basic structure that has worked for thousands of years around campfires or on cave walls. (Andrew picks up a pencil and makes this sketch.)

Sometimes called a story spine, that structure – starting off, building, going down – is not only in most stories but also in most sequences and scenes. If you don’t follow that structure, you may be telling a boring story or a story that goes on too long.

Tolstoy said that great literature comes down to two stories: a person goes on a journey or a stranger comes to town. What does that mean? A person going on a journey is a story of someone changing or learning. A stranger coming to town is about someone who changes the world around them.

But don’t spell out your message. Allow people to figure it out. As (Pixar director) Andrew Stanton has said, “Don’t give the audience four. Give them two plus two.”

CCO: What processes result in stories that work…

Is There an ‘Optimum Time’ for Marketing Emails to Hit? 0

3 Life and Marketing Success Resolutions for 2019 0