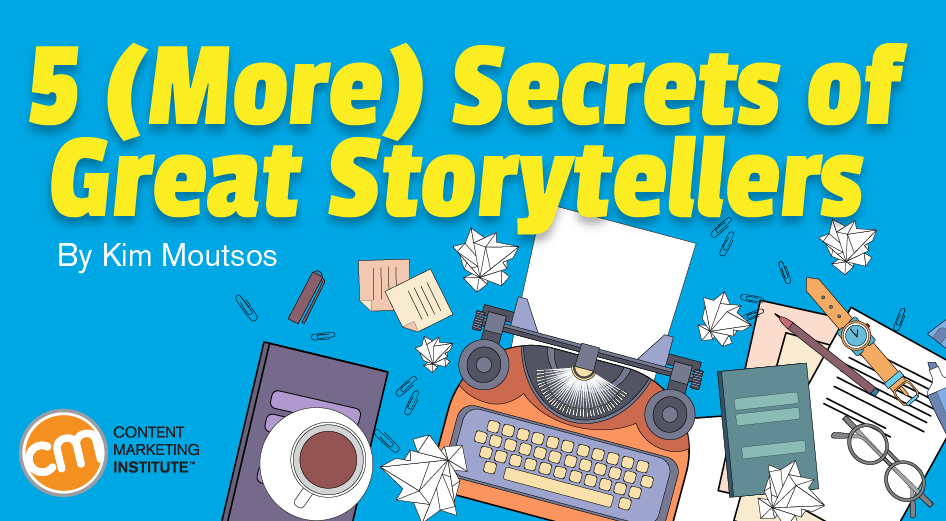 Ira Glass, whose radio show This American Life (and its TV and live spinoffs) has captivated audiences for more than 20 years, says: People don’t really tell you this, but often the amount of time finding the decent story is more than the amount of time it takes to produce the story. At the beginning of the process, asking the right questions can help you figure out whether the story will matter to your audience. Michelle shared these story-vetting questions in her talk at Content Marketing World 2018: Who should care about this? Why does this story matter now? Then, when you start creating the story, questions keep people interested. Even if you’re not writing about a controversial murder conviction, you can find ways to raise questions to create moments of suspense in your writing. And, yes, Michelle ate them. But only one makes people feel something. No matter where you open the story, the sequences should lead people somewhere so they know why the story ultimately matters. It’s your job to be kind of ruthless and understand that either you don’t have a sequence of actions to make the story part of it work, or you don’t have a moment of reflection that works.

You know you’re in the presence of gifted storytellers by the things they make you feel. Anticipation. Surprise. Awe. Anger. Joy. Sadness. Fear. Relief. Nostalgia. Determination. And – when you can break from their spell for a moment – sheer admiration for their craft.

Some people seem to have a knack for it. The rest of us have to work at it, right?

Here’s a secret: Even the most seemingly effortless storytellers work for it, training formally, studying storytellers they admire, or perfecting the tale by telling it again and again at conferences, dinner tables, or campfires.

When you’re struggling to say something that moves people, remember that even Tina Fey acknowledges how hard it can be.

“People who write for a living know writing is the worst,” she said. “Printing is fun. Hitting command P is fun. Everything before command P is a nightmare.” – #TinaFey at #CMWorldhttps://t.co/mb90Ix6JDV #copywriting #contentmarketing

A year ago, CMI’s Stephanie Stahl gathered together 4 Secrets of Great Storytellers. Today, I share five more secrets from experienced storytellers in the hope it gets you through everything before command P.

1. Tell unique stories or give old ones a new twist

Though this tip seems obvious, it’s more difficult than it seems. Ira Glass, whose radio show This American Life (and its TV and live spinoffs) has captivated audiences for more than 20 years, says:

He and his team spend more than half of each week finding and trying stories for the weekly show.

Add in the pressures and considerations common to a marketing team, and the search for a story gets more complicated.

Melanie Deziel, StoryFuel founder and one of the first hires for digital branded content at The New York Times, points to the “press-release mentality” as one cause of stress. Many marketers think – or are pressured from execs to act as if – everything the company does is interesting or newsworthy.

And yet, as Melanie told her audience at Content Marketing World 2018, “The fact that your product comes in a new color doesn’t even begin to register on what (audiences) care about in a day.”

To discover stories that make audiences sit up and listen, Melanie says, find something unique about what you’re doing.

An easy place to start is if you’re working on something that’s truly the first, the biggest, the longest, or another “est.” You also can look for something different or surprising – in the material itself or the way the story is told.

Think of the quick rise of the “hands-and-pans” cooking videos on social media. Where how-to cooking content previously was written in steps or demonstrated with a cook talking to the camera, BuzzFeed brand Tasty built a huge social following with videos that simply show hands working with ingredients in or on, yes, pans (or pots or bowls, cutting boards, or other vessels).

Many brands, including Food Network, adopted the format, but Tasty earned coverage and credit as the innovator in The New York Times, The New Yorker, and other publications.

Serial (a podcast spinoff of This American Life) is another example. Although true-crime stories abound in network television, documentaries, and publishing, the newness of the format combined with a story filled with as many questions as answers earned more than 175 million downloads for its first season. It dominated watercooler conversations for months and eventually earned a spoof on Saturday Night Live.

2. Use questions to keep people hooked

Questions are the lifeblood of all effective stories. At the beginning of the process, asking the right questions can help you figure out whether the story will matter to your audience.

Michelle Park Lazette honed her storytelling instincts as a reporter at local newspapers and business publications. Now that she’s a senior writer for the Federal Reserve Bank of Cleveland, she relies on her journalism training to evaluate story ideas and then craft the right ones to meet the bank’s needs.

Michelle shared these story-vetting questions in her talk at Content Marketing World 2018:

The idea, Michelle says, is to help readers find the “so what,” the potential impact to them and what to do about it.

Questions help you decide whether you have a story in the first place. Then, when you start creating the story, questions keep people interested. That’s because they create what Andrew Davis calls “the curiosity gap,” the idea that we, meaning all humans, want to “fill the void between what we know and what we want to know.”

Serial’s first episode starts with an…

Facing Measurement Challenges in Online Video? This Webinar Is for You! 0

Content Marketing: Is It Something Or Is It Nothing? 0