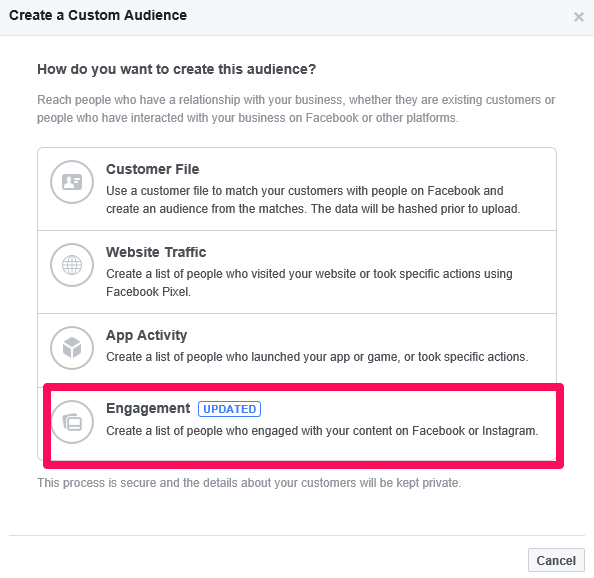 Facebook Page Engagement Audiences Ideally, the majority of your money should be spent on custom audiences inside Facebook. Let’s click on “Facebook Page” to make a list of people who have interacted with your Facebook posts or page. For example, you can now select people that: Have engaged with specific pages or posts on your page. For example, here’s what a template looks like if you need a head start: You can also target your new canvas ads to Facebook users who have opened or interacted with your previous Canvas campaigns in the past. Lead Ads The typical way to convert users from Facebook is to run an ad with a lead magnet offer to people who already have some passing familiarity with who you are (like previous website visitors). That means Lead Ads (and most conversion-based Facebook ads) work the best with previously ‘warmed up’ audiences who’re at the right step in the customer journey. So creating and advertising your videos on Facebook to reach new audiences is a no-brainer. But they do have something else: Custom audiences. As a result, Jon sells them different products and even creates blog posts for each one’s unique interests. Creating new ads with Facebook Page engagement, Canvas, Lead Ads, video views, and page-specific audiences allow you to laser target campaigns across every single step of the buyer’s journey.

Snapchat Advertising 101: How to Run Effective Snapchat Ads
How to Use Facebook Attribution to Scale Your Conversions
Why HR Is The New Marketing

It’s not that those are terrible.

It’s just that there are so many other better options out there.

Facebook ads can get tricky because there’s a ton of variables on each and every campaign. It doesn’t help that Facebook’s constantly rolling out more updates and improvements.

The good news is that many of these new Facebook ad types are game changers if you know what you’re doing and how to use them each properly.

In this article, I’m going to unveil five options that can drastically improve the ROI you’re seeing.

I’ll even show you how to combine several of these techniques, using them together to add new layers of context to predict exactly what your customers want to see (and when they want to see it).

Ready to get started? Here goes.

Ideally, the majority of your money should be spent on custom audiences inside Facebook.

There’s only one potential issue: Using these can often limit your results initially.

Huh?! How does that make sense?

Custom audiences require that you have a large audience. So you’ll need at least a thousand or two on the low end before you are able to see some significant results.

Think about what that means if you’re using a custom audience based on your website traffic or email leads. (Hint: It means you need tons of traffic before ever being able to use them.)

That’s not always realistic for some B2B companies, for example, who only need to see a few big contracts to be profitable. They might never hit that thousand visitors a day mark (or at least, it might take awhile).

But that’s where this new custom audience option is a game changer.

Step #1. Start by selecting “Engagement” to display a list of your brand new targeting options.

Step #2. Next, you’ll see that you can create a new custom audience based on everything from video views to your Facebook Page and even Instagram business profile.

Step #3. Now you can select the action or trigger that places people on this new list.

For example, you can now select people that:

If you’re just looking to reach the widest audience possible at this point, go ahead and select the default “Everyone who engaged with your Page.”

Keep this example in mind going forward because we’re going to return to it a few times to add new layers to other campaigns.

Canvas ads are full-screen advertisements designed to captivate users with beautiful video, images, maps, and other interactive features on your mobile device.

Here is an example of what a Canvas ad looks like:

Since 54 percent of Facebook’s users are on mobile, these ads have the potential to reach millions – and hold their attention.

AdWeek reported in 2016 that the average view time of these ads was a whopping 31 seconds.

Think about that for a moment.

Most people won’t watch a 30-second commercial on TV. Online, you’re lucky if someone glances over at your banner ad while trying to continue reading an article.

And best of all, over half of these ads were created in ten minutes or less.

There’s no additional cost to create these ads. I’ll show you in a second how to select them when you’re creating any other new ad.

The final advantage of Canvas ads is that they rely on Facebook’s Instant architecture. So there’s zero lag to load each interactive ad. That’s critical considering the vast majority of mobile pages load too slowly.

In comparison, Canvas ads (using Facebook Instant) will load complex videos and details in fractions of a second.

Here is an example of how what an ecommerce canvas ad looks like:

On the left-hand side, you can connect your product catalog which will load directly in the middle of the ad. Then you can add a custom CTA button below.

All you have to do is go into the Facebook Ad Manager and select Canvas ads under “ad format.” You can even turn carousel ads into Canvas ads to get up-and-running within minutes.

The carousel feature allows you to show more of an ad than would normally fit on the screen, with the capacity for up to ten videos or photos in a single ad.

Each carousel ‘card’ can also be linked to a different landing page, so you could theoretically advertise 10 different products with one canvas ad using this feature.

JewelScent saw a 3x decrease in the cost per click with carousel ads over link ads, along with three times the return, too.

After selecting the Canvas ad, you can copy an existing template to work off (or create your own custom one). For example, here’s what a template looks like if you need a head start:

You can also target your new canvas ads to Facebook users who have opened or interacted with your previous Canvas campaigns in the past.

The typical way to convert users from Facebook is to run an ad with a lead magnet offer to people who already have some passing familiarity with who you are (like previous website visitors).

Here’s what one of those ads would look like:

And the goal would be to send the people who click on this ad to a landing page like this webinar one:

2 Ways to Supercharge Your Support with Video 0

7 Steps to Building a Content Marketing Culture That Works 0

How to Growth Hack Online Dating 0