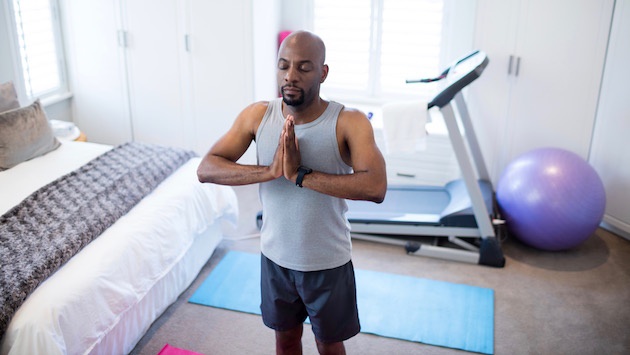 I Tried Five Morning Routines So You Don’t Have To. Here’s What Works.

Elon Musk The famous figure behind Tesla and SpaceX gets six hours of sleep, typically waking up at 7:00 a.m. From there, his routine looks roughly like this: Addresses critical emails for 30 minutes Drinks coffee -- but is too busy for breakfast Sends kids off to school Showers and goes to work To prepare for my Elon Musk morning, I stayed awake until midnight to ensure accuracy. That meant my “address critical emails” time was partially cut short -- in my half-asleep state, I flung my cell phone behind my bed and needed to take some time to move the bed to retrieve it. And I’ll admit: It felt really good to get the workout over with. Meditation and running can encourage you to start your day in a healthy mindset. Tony Robbins This motivational speaker gets three-to-five hours of sleep, waking up between 7 a.m. and 9:00 a.m. After that, he: Performs a breathing exercise Expresses gratitude Experiences connection Visualizes success I left this morning routine for Friday because it sounded -- well, the easiest, if you will. It wasn’t the first time I’ve thought of things to be grateful for, but it was the first time I’ve tried visualizing the list. For the last three minutes, Robbins spends each minute on one goal and imagines how it will feel to accomplish that goal. Long-Term Takeaways What I'll Do Next At the end of my five-day morning routine experiment, I considered going back to my ordinary routine. But instead of a full ten minutes of Instagram in the morning, I’ve switched to seven minutes on Instagram and three minutes dedicated to gratitude. Tackle the day -- early on -- with emails and/or industry headlines.

What Did American Consumers Want From the Maker of Cup Noodles and Top Ramen? Hats and Shirts, Apparently.
Transcript of How to Develop the Right Idea at the Right Time
Twitter reacts with anger as tech CEOs offer to reach out to Trump over immigration ban

I’m not a morning person.

My morning consists of waking up as late as possible and feeling personally victimized by my alarm clock. And no matter how many times I wake up to my alarm, my first thought is always, “Why are you doing this to me?!”

It has caused a love-hate relationship between my phone and myself.

Disgruntled, I then scroll through my Instagram feed. Oh, did I say, “As late as possible”? I should mention I give myself ten minutes to get out of bed.

Here are (a few) things I do NOT do in the morning:

Maybe that’s why I am not a widely famous life coach, rich entrepreneur, CEO or founder of any major corporations, creator of any mega-popular social media channels, or author of any best-sellers.

At the end of it, did I actually become more productive? You’ll just have to read to find out.

I Tried Five Morning Routines So You Don’t Have To

The famous figure behind Tesla and SpaceX gets six hours of sleep, typically waking up at 7:00 a.m. From there, his routine looks roughly like this:

To prepare for my Elon Musk morning, I stayed awake until midnight to ensure accuracy. He doesn’t get more than 6 hours of sleep, so neither could I.

That meant my “address critical emails” time was partially cut short — in my half-asleep state, I flung my cell phone behind my bed and needed to take some time to move the bed to retrieve it. How Musk runs two multi-billion dollar companies on six hours of sleep is beyond me.

I soon realized I had another problem with the address critical email activity. As you might imagine, being a marketing blogger doesn’t require quite as many critical back-and-forth emails as being founder and CEO of Tesla and SpaceX. So, I refreshed my email and replied to the six emails in my inbox, which took about seven minutes — leaving me with 23 minutes to spare.

I’ll admit that I didn’t love starting my morning with emails. I wasn’t fully awake, so I can only hope my responses resembled something coherent. Plus, by the time I got to work, I had to re-read the emails because I forgot what they said.

But I understand why Musk does it. Emailing can put you in a task-oriented mindset: “Okay, here are the things I need to tackle first when I get to the office.”

Showering is also something I also do every morning — and likely the only thing Musk and I have in common — and I don’t have any kids to say goodbye to. And while I respect that he only drinks coffee in the mornings (with only six hours of sleep, I needed it, too), by the time I got to work at 8:45, I was starving.

So, although Musk skips breakfast, I allowed myself a banana. After all that hard work responding to critical emails — not to mention, moving my bed frame — I figured I deserved it.

This entrepreneur, author, and speaker wakes up at 6 a.m., followed by these tasks:

How Vaynerchuk — better known to some as “Gary Vee” — devours this much information and actually retains it at 6 a.m. is nothing short of miraculous.

But I made a list of these links in my Notes app the night before, and at 6:01, I opened Techmeme and read the headlines. I then made my way through Business Insider, ESPN — which I barely skimmed, since I don’t understand sports at any time of day — Twitter, and Instagram.

It felt like a ton of information to devour before getting out of bed.

While reading these articles in their entirety wasn’t entirely feasible due to time restrictions, checking out “what’s going on” in one’s industry in the morning seems a good idea. The article headlines inspired me to jot down some new ideas before I even reached the office.

For the next time, however, I don’t have a personal trainer — but I do have Shaun from the T25 “high-intensity” workout DVDs. I figured that was close enough. And I’ll admit: It felt really good to get the workout over with. I was energized and refreshed by 7 a.m. and didn’t have to worry about fitting in a workout after work.

That said, it’s also really hard to do a high-intensity workout without any breakfast. So buyer beware: You might feel like passing out.

After that, Gary calls a family member on his way to work. I called my brother and spoke to him for exactly 47 seconds, mostly about why I was calling him that early and thought it was okay to wake him up.

The founder/CEO of both Twitter and Square wakes up at 5:30 a.m., followed by meditation and a six-mile run.

After checking emails during my Elon Musk morning and devouring news outlets during my Gary Vee experience, I was enthusiastic to meditate during Jack Dorsey’s morning. Granted, I was less thrilled to run six miles — but we’ll get to that later.

I’m a meditation rookie, so I downloaded a meditation app called Simple Habit. I didn’t think I could do real meditation if I tried to do it on my own — in fact, I’d probably just fall asleep.

The Simple Habit app starts you off slowly. My first lesson was only seven minutes long, mainly focused on my breathing. Admittedly, at 5:30 a.m., staying awake was the biggest obstacle — which I actually managed to accomplish

Surprisingly, I enjoyed meditating that early. It was easier for me to focus first thing, before my thoughts had the chance to ramp up. Plus, the research behind meditation has indicated numerous benefits to the well-being of employees — things like creativity, focus, decision-making, stress-reduction, and more.

Of course, then I had to get up off my meditation floor and run. Keep in mind that I’ve taken about five months off of running outdoors, because Boston winters…

A List of Essential Platforms for Sharing Your Marketing Video 0

The Hidden Growth Assets that All Successful Entrepreneurs Need 0