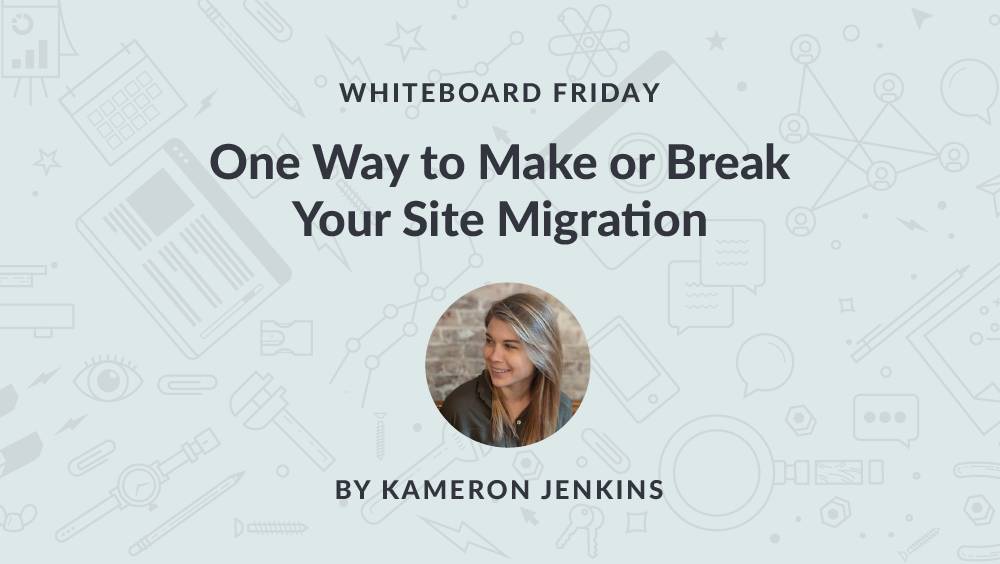 Redirects: One Way to Make or Break Your Site Migration – Whiteboard Friday

Correctly redirecting your URLs is one of the most important things you can do to make a site migration go smoothly, but there are clear processes to follow if you want to get it right. In this week's Whiteboard Friday, Kameron Jenkins breaks down the rules of redirection for site migrations to make sure your URLs are set up for success. Maybe the client comes to us and they say, "Hey, we've been writing content and blogging for a really long time, and we're just not seeing the traffic and the rankings that we want. If you don't know the importance of redirects, you might handle things like content and making sure the buttons all work and the template looks nice and things like that, the visible things. The same thing with the deadlines. Non-SEOs handling the redirection Then another situation that can cause site migration errors and 404s after moving around is non-SEOs handling this. So now that we kind of know what I'm talking about with migrations and why they kind of sometimes still happen, I'm going to launch into some rules that will hopefully help prevent site migration errors because of failed redirects. Make sure you're always linking URL to its new location, one-to-one every single time for every URL that's moving. But because of situations like deadlines and things like that, when we're down to the wire, I think it's really important to at least have started out with your most important URLs. But the most important thing to remember is just to do it, just to test and make sure that even once you've implemented these things, that you're checking and making sure that there are no issues after a launch.

The Comprehensive List of What Needs to Be Above the Fold on Your Homepage
Why Everyone Is Leaving Your Website (And What To Do About It)
#SocialSkim: LinkedIn’s New Website Demographics, WhatsApp’s Business Chat: 10 Stories This Week

Correctly redirecting your URLs is one of the most important things you can do to make a site migration go smoothly, but there are clear processes to follow if you want to get it right. In this week’s Whiteboard Friday, Kameron Jenkins breaks down the rules of redirection for site migrations to make sure your URLs are set up for success.

Click on the whiteboard image above to open a high-resolution version in a new tab!

Hey, guys. Welcome to this week’s edition of Whiteboard Friday. My name is Kameron Jenkins, and I work here at Moz. What we’re going to be talking about today is redirects and how they’re one way that you can make or break your site migration. Site migration can mean a lot of different things depending on your context.

I wanted to go over quickly what I mean before we dive into some tips for avoiding redirection errors. When I talk about migration, I’m coming from the experience of these primary activities.

One example of a migration I might be referring to is maybe we’re taking on a client and they previously used a CMS that had a default kind of URL formatting, and it was dated something.

Another instance is that sometimes we’ll get clients that come to us with kind of dated or keywordy URLs, and we want to change this to be a lot cleaner, shorten them where possible, just make them more human-readable.

An example of that would be maybe the client used URLs like /best-plumber-dallas, and we want to change it to something a little bit cleaner, more natural, and not as keywordy, to just /plumbers or something like that. So that can be another example of lots of URLs moving around if we’re taking over a whole site and we’re kind of wanting to do away with those.

Another example is if we’re doing a complete content overhaul. Maybe the client comes to us and they say, “Hey, we’ve been writing content and blogging for a really long time, and we’re just not seeing the traffic and the rankings that we want. Can you do a thorough audit of all of our content?” Usually what we notice is that you have maybe even thousands of pages, but four of them are ranking.

So there are a lot of just redundant pages, pages that are thin and would be stronger together, some pages that just don’t really serve a purpose and we want to just let die. So that’s another example where we would be merging URLs, moving pages around, just letting some drop completely. That’s another example of migrating things around that I’m referring to.

Don’t we know this stuff? Yes, but…

That’s what I’m referring to when it comes to migrations. But before we dive in, I kind of wanted to address the fact that like don’t we know this stuff already? I mean I’m talking to SEOs, and we all know or should know the importance of redirection. If there’s not a redirect, there’s no path to follow to tell Google where you’ve moved your page to.

It’s frustrating for users if they click on a link that no longer works, that doesn’t take them to the proper destination. We know it’s important, and we know what it does. It passes link equity. It makes sure people aren’t frustrated. It helps to get the correct page indexed, all of those things. So we know this stuff. But if you’re like me, you’ve also been in those situations where you have to spend entire days fixing 404s to correct traffic loss or whatever after a migration, or you’re fixing 301s that were maybe done but they were sent to all kinds of weird, funky places.

Mistakes still happen even though we know the importance of redirects. So I want to talk about why really quickly.

Unclear ownership is something that can happen, especially if you’re on a scrappier team, a smaller team and maybe you don’t handle these things very often enough to have a defined process for this. I’ve been in situations where I assumed the tech was going to do it, and the tech assumed that the project assistant was going to do it.

We’re all kind of pointing fingers at each other with no clear ownership, and then the ball gets dropped because no one really knows whose responsibility it is. So just make sure that you designate someone to do it and that they know and you know that that person is going to be handling it.

Another thing is deadlines. Internal and external deadlines can affect this. So one example that I encountered pretty often is the client would say, “Hey, we really need this project done by next Monday because we’re launching another initiative. We’re doing a TV commercial, and our domain is going to be listed on the TV commercial. So I’d really like this stuff wrapped up when those commercials go live.”

You’re Only as Strong as Your Annual Marketing Plan 0

How to be a legit NASA astronaut this Halloween 0