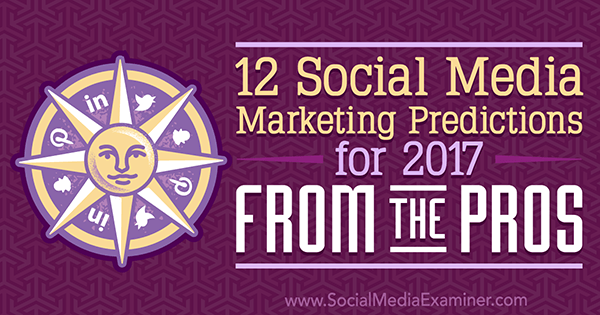 12 Social Media Marketing Predictions for 2017 From the Pros

Are you wondering how marketing on top social media platforms will change this year? To find out how marketing on Pinterest, Twitter, LinkedIn, and Snapchat will transform in the coming year, we reached out to expert social media professionals to get their thoughts. #5: Snapchat Spectacles Feature AR/MR Shopping Point of view content will be huge for brands, marketers, and influencers in 2017. It’s been said that customer service is the new marketing, so it makes sense that social customer service is being recognized as the new social media marketing. And one of the most powerful places customer service can exist is in a social media marketing strategy. For now, marketers should remember that Twitter is still a primary traffic source for blog content and continue to share their content there. Instagram has evolved with Instagram Stories. #9: Twitter Marketers Shift Focus From Driving Traffic to Creating Connections The recent changes Twitter has made, including the addition of an algorithm, mean that Twitter is the social network marketers most need to change their approach to. Or they continue to implement the same Twitter marketing strategies that worked 2 or 3 years ago. The platform will make it easier to create content for the people you are connected with, and will look at integrating some form of live stream ability Twitter will also invest further into live video.

Are you wondering how marketing on top social media platforms will change this year?

Social media is constantly evolving to reflect the needs and preferences of customers and marketers alike.

To find out how marketing on Pinterest, Twitter, LinkedIn, and Snapchat will transform in the coming year, we reached out to expert social media professionals to get their thoughts.

Believe it or not, Twitter turns 11 in 2017, which by social media standards makes it one of the veterans. Over the past few years, we’ve seen it start to get a bit of a bad reputation. With Instagram and Snapchat stealing some of its users, marketers have started to question whether Twitter’s gone stale.

Are Twitter’s days numbered? In our opinion, not at all. Twitter is so ingrained in modern-day life, there’s no chance of it going away anytime soon. As marketers, however, we need to recognize why people are getting fed up with Twitter and adapt our strategies to suit.

We think the businesses and brands that are going to do well on Twitter this year are those that stop using it to blast out one-way communications and start using it to connect with people from across the world to have one-on-one, real-time conversations.

How do you do this, though? Cut back on: 1) the automation, 2) scheduling a week of tweets on a Monday and then never logging back in until it’s time to schedule more tweets, and 3) the hashtag-stuffed tweets.

We do think hashtags and content promotion are still key aspects of a good Twitter strategy even this year but don’t rely solely on them. Instead, start conversations. Tell the world what you’re up to, post images like you would on Instagram, use Twitter’s live app to broadcast with Periscope. Most importantly, create tweets that people can easily reply to.

Last September, Snapchat rebranded as Snap, Inc. and quickly proclaimed that it would now be referred to as a camera company and no longer just a social network. Shortly thereafter, the newly formed Snap, Inc. released Spectacles to the masses (sort of).

In the months since, and despite Spectacles reeling in mixed reviews, rival Facebook has upped the ante for social media market share by rolling out live video capabilities on Instagram, whose user demographic closely aligns to Snapchat’s. Plus Facebook added Snapchat-like features to its Messenger product.

Facing an IPO, as well as pressure to stave off Facebook and Twitter, Snap, Inc. (a.k.a. “Snapchat”) will introduce its own set of live-streaming features that will make live video more appealing and mainstream to younger audiences, much in the way Musical.ly has helped introduce live video to them. Although Snapchat will have built-in disappearing live video similar to Instagram, it will need to create more of a “sizzle” to keep investors on Wall Street happy.

Therefore, I boldly predict that for Snap, Inc. to create legitimacy as a camera company and to grow revenue beyond advertising, it will acquire GoPro and its millions of enthusiasts in the process. A Snapchat and GoPro merger is a win-win in every sense of the word for Snapchat and users, who would then be able to share stunning, HD-quality content to Snapchat from their GoPro device without the aid of an iPhone.

Carlos Gil is the global head of social media for BMC Software.

I believe Pinterest will try to move video and video ads to the forefront of the platform. Because video feels a bit like a speed bump in the user experience, marketers will need to test whether loading video to off-platform landing pages or directly to Pinterest works best for their audience.

Kate Ahl is the owner of Simple Pin Media, a Pinterest management company.

Twitter is an enigma. It’s not the biggest channel or the most popular, but it’s undeniably part of the fabric of our lives.

While some may foresee the demise of Twitter, I don’t. Twitter has a huge, passionate user base. It’s the place where news breaks and tweets have become a centerpiece of popular culture and politics.

Twitter has a bright future, but probably not as an independent company. It’s a goldmine of data and belongs in a data-hungry company somewhere.

Mark Schaefer is the author of The Tao of Twitter.

Point of view content will be huge for brands, marketers, and influencers in 2017.

Snap will roll out Spectacles 2.0, which will include some element of AR/MR. This feature will signal a push toward AR/MR-enabled shopping and we’ll begin to move away from doing everything through our mobile devices and start to do it through wearables like Spectacles.

Cathy Hackl, a nationally recognized live video and VR/AR influencer and speaker, is one of the nation’s top Latino digital influencers and tech innovators.

Your 2017 Content Marketing Goal: Give the People What They Want 0

The Business Podcast Primer: The Right Way to Do What Is So Often Wrong 0