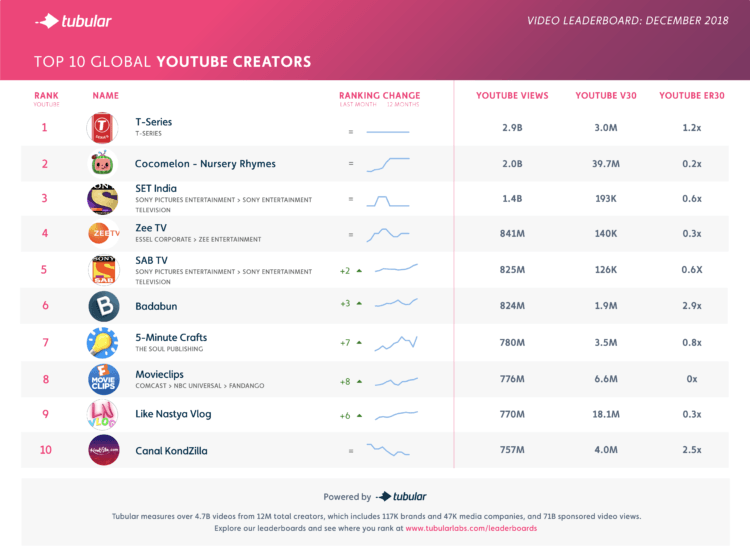 The highest average 30-day engagement rate (ER30) of the top ten channels hit 2.9x, while the highest ER30 of the top 100 publishers hitting a massive 9.8x! Top YouTube Channels December 2018 December’s top ten YouTube channels actually saw quite a bit of change. However, all other channels in the top ten increased their rankings, with SAB TV and Badabun increasing their rankings by two and three spots respectively. December Was Google’s Takeover Month on YouTube Normally, we don’t see Google ever landing in the top YouTube channels leaderboards. It landed at #25 in December after jumping 620 spots thanks to more than 494 million views and a higher-than-average V3 of 2.8 million. Nine of Google’s top ten most-watched clips from December were Google Search summaries of the last year, with Google’s “Year in Search – 2018” topping the list with 113 million views to date; this video was a clear hit with viewers because it celebrated all the positive, happy-go-lucky search trends from 2018, ending with the phrase “Good things are worth searching for.” The only other video on Google’s top ten list last month highlighted the benefits of Google Assistant in a very nostalgic, Home Alone-inspired ad featuring none other than the film’s star Macauley Culkin himself (all grown-up, of course, and enjoying the ease of running his empty house with Assistant). Next up, we had YouTube Music take spot #60 on December’s chart thanks to a rank increase of 163 and a view count of more than 326 million. Squishy Things and Sports Land on Top YouTube Channels One of the next surprises on December’s top YouTube channels leaderboard was a DIY/life hacks channel dubbed HelloMaphie, which landed at #42 thanks to almost 388 million views and a rank increase of 228. Tubular Video Ratings You’ll notice some exclusive data in this month’s chart as we include Tubular Video Ratings, a unique group of online video metrics that set the standard for measurement of views and engagements across videos and publishers. Each month Tubular Insights will publish the most up-to-date leaderboard charts, so stay tuned!

New Findings Show Google Organic Clicks Shifting to Paid
You Have 8 Seconds – GO! Brand Trust Secrets With Debra Jasper at #Pubcon 2018
The State of SEO: What the Latest Algorithm Updates and Reports Are Telling Us

When we release our monthly leaderboards, we’re sometimes surprised at which top YouTube channels land on the chart, and that’s definitely what happened for December. A lot of familiar creators, brands, and channels were seen in the top ten, which collectively generated just over 12 billion views last month (800K more than they pulled in during November 2018). But in December, quite a few new channels popped onto the scene we weren’t expecting. Before we jump into these surprise channels and trends, let’s take a look at key data points from last month:

December’s top ten YouTube channels actually saw quite a bit of change. Indian media brand T-Series continues its domination of YouTube despite gaming personality PewDiePie beating it in terms of subscriber counts. And thanks to the continuous viewing habits of young children, Cocomelon of course stayed in #2 and claimed the highest V30 across all 100 top publishers at 39.7 million. SET India, Zee TV, and Canal Kondzilla all stayed in their same positions from November 2018. However, all other channels in the top ten increased their rankings, with SAB TV and Badabun increasing their rankings by two and three spots respectively. 5-Minute Crafts, Movieclips, and Like Nastya Vlog all jumped back into the top ten in December thanks to around 770-780 million views each. However, it’s the rest of December’s leaderboard chart we’re really interested in looking at, especially considering YouTube’s parent property Google dominated its own platform at the end of the year.

Normally, we don’t see Google ever landing in the top YouTube channels leaderboards. Despite running one of the biggest online video platforms, the tech and data giant simply doesn’t actively create and distribute video content on its owned and operated channels. But that all…

What If the ‘Game of Thrones’ Houses Were Brands? 0