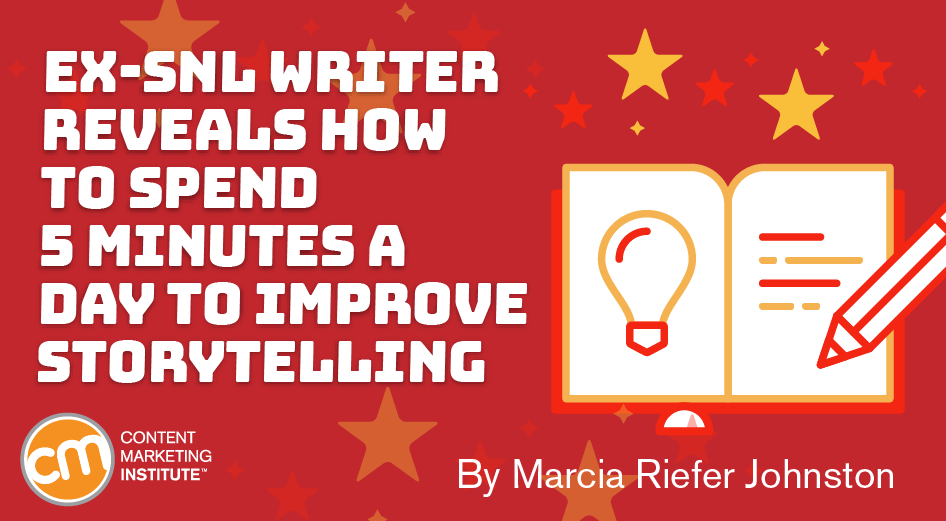 Exercise in word play I saw my first live improv show, when I was 9 or so. Create a word map or web of words for each term. That shows that they’re open to ideas,” Tim says. Example 1: Playing with “circus” and “bacon” Here’s how this exercise went for one group Tim worked with. Now the team has a silly idea that connects with people. The audience shouted out “chinchillas” and “marshmallows.” Suggested word associations for “chinchillas” included fur, squirrel, and traps, and s’mores and campfires for “marshmallows.” Someone suggested a connection between the two word groups – marshmallow traps. Maybe that leads you to a psychologist’s office, where he’s talking about why he doesn’t trap deer any more, just marshmallows.” I’d love to see someone make that commercial. As Tim shares, “This kind of exercise leads you to absurd ideas. In that same talk, Tim suggests using a similar exercise when brainstorming your real content ideas – but playing with words related to customer pain. Why don’t we do more playing around like this?

From creative to content: Effective marketing combines the best of both worlds
How to Meet (and Exceed) Your Creative Content Goals
Communication, Creativity, and a Sweet Halloween Deal on Our New Copywriting Course

Want to get more creative in your marketing, especially your storytelling? Spend five minutes a day doing something that masters of improv do: Play with words.

That was stand-up comedian Tim Washer’s advice in his talk, How to Use Improv Techniques to Improve Your Storytelling, at Content Marketing World in 2016. He walked us through some examples, which I’ll share in this post.

First, in case you missed my recent article based on this same talk, let me fill you in on who this guy is. In addition to serving as social media manager for Cisco Systems’ Service Provider Marketing group, Tim has worked on Last Week Tonight with John Oliver and Late Night with Conan O’Brien, studied improv under Amy Poehler and written for her on Saturday Night Live’s Weekend Update, and worked as a “corporate humorist” for clients like Google, IBM, FedEx, and Pepsi.

Read on to learn from an improv master how to become a more creative marketer. (All images come from Tim’s presentation slides.)

I saw my first live improv show, when I was 9 or so. My dad took my sister and me to Second City in Chicago. One of the actors asked for the name of an animal. “Aardvark!” I shouted. How on earth would they weave a reference to an aardvark into their skit?

It seemed impossible that this team of energetic people on the stage could create a vignette on the spot using the audience’s suggestions. As they did exactly that, I waited, waited, waited. Finally, at the end of the skit, one of the actors burst into song, ending with the rousing line “up in a tree, with the aardvark and me!”

How had they pulled it off? It was magic.

Decades later, it still seems like magic to me that any group of people can instantly create a story – let alone a funny story – from a bunch of random words. I never considered trying it myself.

Tim says it’s time to go for it. He urges everyone who does creative work (and we all do creative work) to expand our storytelling capacity by spending five minutes a day, either alone or with a group, playing with word juxtaposition. In other words, yoke unrelated ideas together to create something new.

You do this by following the Tim-recommended “path of nonsense”:

“This is one of the best ways to come up with new ideas when you’re staring at a blank piece of paper, and you’re trying to come up with something new,” Tim says. “You can get to genius with this.”

If you do this exercise with others, look for people who like to take risks and who have a sense of humor. “Not people who tell jokes but people who laugh. That shows that they’re open to ideas,” Tim says.

Example 1: Playing with “circus” and “bacon”

Here’s how this exercise went for one group Tim worked with.