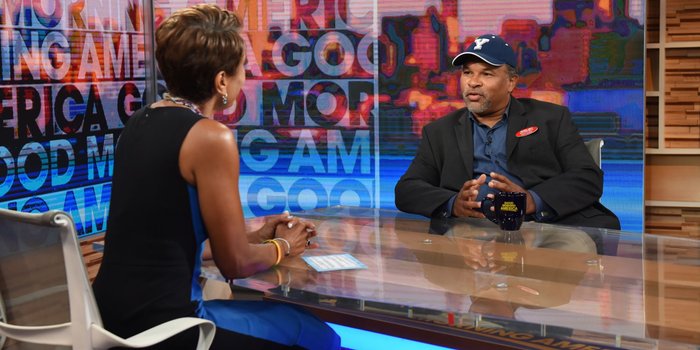 Geoffrey Owens Never Deserved What He Got. Job-Shaming Is Just Plain Tacky.

Image credit: Paula Lobo | ABC | Getty images The media-hungry public loves a hard-luck story, especially when the focus is on someone who once rode a wave of success. I’ve had a great career. "I got to a point where I'd been teaching acting and directing for 30-plus years but it just didn't add up enough," Owens said. Any job. Owens's attitude resonated for me, reminding me of the Christmas season of 2013, when, at the tail end of the recession, and deep in debt, I took a job from Thanksgiving to New Year's, selling scarves and fancy tablet covers at Macy's for the princely salary of $8 an hour. I grabbed a store runner by the lapels and begged him to find me that box.) I wasn't at all embarrassed to be capping my 30-year career in journalism with a minimum-wage job. Not only did the photographer behind his "outing," Karma Lawrence, get all kinds of online hate mail, but she apologized. And Owens? Tyler Perry tweeted at Owens on Tuesday, possibly referring to his long-running show, The Haves and the Have Nots.

State of Online Video Q2 2017: The Latest Trends [Free Webinar]
Sample 11 of the Best B2B and B2C Content Marketing Ideas of 2018
Kaltura is a Leader in Online Video Platforms for Sales and Marketing Report

The media-hungry public loves a hard-luck story, especially when the focus is on someone who once rode a wave of success.

Think about the off-Broadway and movie actress Patricia O’Grady (bit parts in Taxi Driver and Next Stop Greenwich Village) who local media last May revealed had lived for 60 years in New York City’s cheapest rent-controlled apartment ($28 a month) in high-end Greenwich Village.

The place was a dump: no heat, no hot water, but O’Grady, whose story gets worse — she was fatally struck by a car at age 84 ahead of those May reports — stayed in her rent-controlled space long, long after her career peaked. The point was, she wanted to stay in that apartment; she wanted to pay that rent. She even asked her landlord, who was a pal, not to make improvements because, she said, her tiny rent bill didn’t warrant it.

The Geoffrey Owens story is similar, in some ways.

Owens, as the whole world knows by now, played Sondra Huxtable’s husband Elvin on the TV hit, The Cosby Show, from 1985 to 1992. But actors’ fortunes are known to rise and fall; that’s apparently why Owens was working at a Trader Joe’s in Clifton, N.J.

There, a shopper named Karma Lawrence snapped his photo and offered it to celebrity websites. The Daily Mail, in the U.K., published a story about Owens on Aug. 30. That led to a second “outing,” so to speak, by Fox News. Social media then went crazy — all creating the distinct impression that these various media players were trying to shame the actor.

But let’s hear it for how Owens, 57, responded; he was “devastated” by the photos, but he wasn’t bitter. “No one should feel sorry for me. … I’ve had a great life. I’ve had a…

How to Rev up the Success of Your WordPress Website 0

When It Comes to Influencers, Fake Engagement Is Only Half the Problem 0