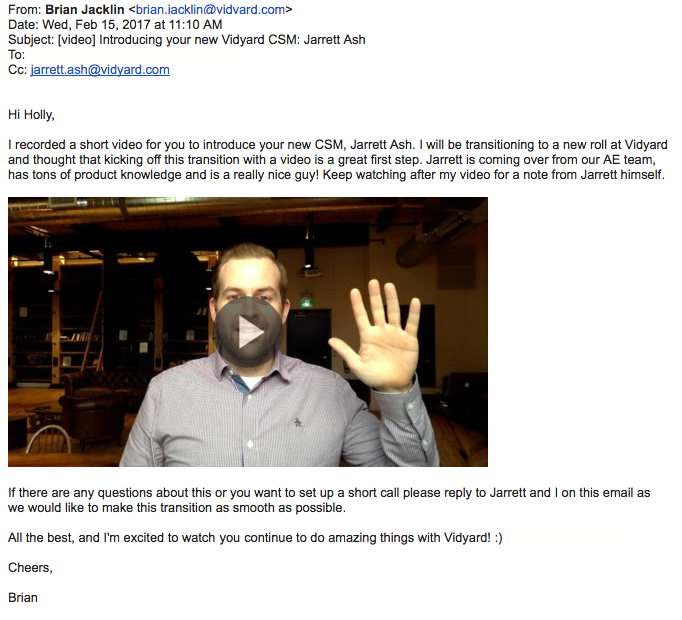 How Brian Used Video in Customer Success to Communicate Change

Source: Vidyard Every CSM knows that change can be a big sticking point for customers, especially a change like a new customer success manager. That

Every CSM knows that change can be a big sticking point for customers, especially a change like a new customer success manager. That’s why, when Brian Jacklin, previous CSM at Vidyard, confirmed that he was changing roles within Vidyard he knew that he needed to do something special for his 61 accounts. Something that informed them of the situation and let them know that they’d be well taken care of.

That’s why he turned to video.

Brian recorded a webcam video explaining the transition for his accounts to their new CSM, Jarrett Ash, and even asked Jarrett to record his own video to say hello to his new accounts, too.

The communication was a huge success with an unheard of 100% open rate. His video had 51 unique views (of 61 unique people who received it), and retained more than 65% of viewers all the way to the end.

We figured we’d be selfish not to share how they did it – and no one likes selfish – so here we are! Keep reading to learn the distribution strategy, see the video, and learn about the program’s results.

The video was sent through email from Brian to all 61 accounts.

Loading...
Newer Post
The Fundamentals to Building a Successful eCommerce Business From Scratch
Older Post
A Day in the Life Of: Head of Brand Partnerships at ATTN:

8 Key Questions to Ask Before Hiring a PPC Company 0