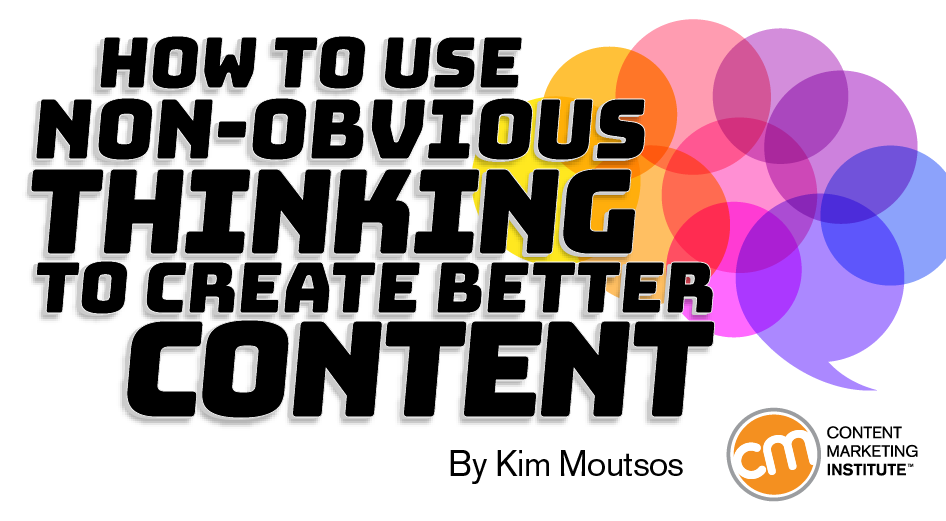 How to Use Non-Obvious Thinking to Create Better Content

Rohit’s done much of the work for you, offering up a “stealable idea” for each trend he shared in the 2018 edition of his best-selling book series Non-Obvious: How to Predict Trends and Win the Future. Here are three trends (and suggestions for what to do about them) Rohit predicts will have a big impact on content marketing this year and possibly in years to come. Design*Sponge founder Grace Bonney recently countered this trend with a thoughtful essay explaining what she’s learned about why people make the design choices they do, the reasons commonly given for criticizing those choices, and how she’s planning to change her site’s content to counter negativity. A thoughtful, nuanced discussion of design and content – an enjoyable and informative read all the way through the comments. In Defense of Trends (why my thoughts on them have changed and why design should let go of judgement more often): https://t.co/hwwXmkDQBS pic.twitter.com/0YOTOy9Wzl — Grace Bonney (@designsponge) March 15, 2018 Non-Obvious trend: Brand stand Reacting to a polarized media atmosphere, more brands feel compelled either by choice or necessity to take a stand and offer a distinct point of view about the world. Because people want to know. Rohit says they signed off because no one (wisely) tried to convince them free ice cream would sell cars. Rohit says a brand making a statement like that gives people a reason to believe in the company, a reason to come in and check it out. Most likely your brand has so many more stories in its history and the potential to tell them in a way that’s unique to your brand voice. One bonus idea to steal: Curate trends yourself One of the best ideas to steal is one Rohit openly teaches – how to curate non-obvious ideas yourself.

“We’re in the middle of a believability crisis.”

On the surface, author Rohit Bhargava’s observation in the keynote talk of CMI’s virtual ContentTECH this year doesn’t bode well for content marketing.

After all, to attract and retain an audience, we need people to believe the content we’re creating.

But don’t be discouraged by Rohit’s pronouncement. Instead, get inspired by the deeper meaning uncovered (true to form for the CEO of the Non-Obvious Company) in this crisis and other trends.

Rohit’s done much of the work for you, offering up a “stealable idea” for each trend he shared in the 2018 edition of his best-selling book series Non-Obvious: How to Predict Trends and Win the Future.

Here are three trends (and suggestions for what to do about them) Rohit predicts will have a big impact on content marketing this year and possibly in years to come.

Sometimes outrage is reasonable and justified. Sometimes it’s packaged and sold to generate clicks and views. Cable news, Rohit points out, is having a banner year because it’s selling outrage.

“When you think of yourself as a person who is outraged, you don’t give yourself permission not to be outraged because it doesn’t feel like you,” Rohit says.

He shares the example of Steven Crowley, who coped with his baby daughter’s illness by editing her image into a photo series of dangerous situations. When he posted the humorously altered images on social media, he was met by a storm of misplaced fury as people criticized him for endangering his child.

Cooking up a storm (before everyone goes crazy, don’t worry, the oven clock is set wrong, she isn’t actually still awake at 9.35pm)

Steal this idea: Rise above the clickbait

Can you use this outrage trend to improve your content? Rohit thinks it’s possible if you respect it’s there – and move away from it.

Before you go for the easy click prompted by outrage, shock, or fear, remember that those kinds of headlines rarely result in sustained engagement.

To understand why, consider how you feel when you fall for a headline such as “See what (your favorite childhood star) looks like now” or other clickbait ploy. Aren’t you a little embarrassed and possibly annoyed by the 45-page slideshow you wade through to get to the star? You click through a few slides, but as you progress you feel worse and worse about your decision – and turn away quickly.

“We know what this feels like,” Rohit says, “so let’s not go in this direction.”

Instead, he suggests, “put something more positive, useful, and valuable out into the world.”

I came across an example of content that deliberately rises above the ploys in the home design content industry. You’ve probably seen at least one “10 Trends We Hate” or “X Trend Is Officially Dead” article. They are popular and produce engagement – often in the form of heated comments defending or attacking one of the trends. But the negativity wears on the rest of the audience and the content creators. Take a spin through the comments on Apartment Therapy to see plenty of vitriol directed at the site content, content producers, featured design choices, and sometimes other commenters.

Design*Sponge founder Grace Bonney recently countered this trend with a thoughtful essay explaining what she’s learned about why people make the design choices they do, the reasons commonly given for…