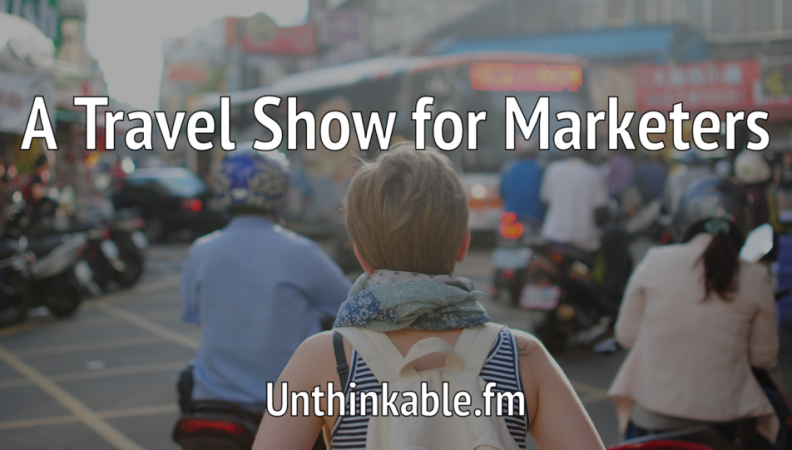 How We Create a Travel Show for Marketers: The Thinking Behind Unthinkable

There’s an old saying from an ancient Greek philosopher: “It’s pretty lazy to open an article with old sayings.”

In the marketing world today, we’re witnessing same trend with podcasting that we experienced during blogging’s rise to ubiquity years ago: sameness.

It’s not that “noise” is the problem, per se, it’s that copying “what works” from others often causes you to blend in. For instance, the world does not need YET ANOTHER show about marketing featuring two talking heads discussing “the trends, topics, and technologies markets care about.” And yet, we’ll see at least 25 more of those by years’ end, I’m sure of it.

So how do you stand out and get results in a world so full of sameness?

Be the exception. Zig when others zag.

In my weekly show, Unthinkable, we tell the stories of people who have done exactly that. As the name of the series implies, the subjects have broken from conventional thinking. They’ve made the leap from producing average noise to crafting exceptional work.

But when you make stuff for makers as I do, your world gets pretty meta. So not only are we exploring individuals who strive to be the exception, we’re trying to make our show an exception too. At the very same time, I’m documenting others’ journeys and embarking on my own.

And it all started with two things: a bleeding heart, and a big idea. If you’re hoping to create something that breaks from the noise, I’d suggest you start there too.

The Bleeding Heart: What is the personal belief that drives you?

“Bleeding heart” sounds pretty intense, I know, but that’s the point: What is your most intense belief? What would you pursue at any cost?

I’ve always been fascinated by and enamored with those moments in the quiet, when you’re head-down doing your work, and something about the process causes you to geek out. It’s like a burst of energy hits you in your gut, causing you to nearly cackle out loud. As a writer, I’ve felt this when I think I’ve landed a joke, or I’ve woven an analogy into a piece, or I’ve ended an article using a surprising callback to a theme I used in the introduction.

Whatever the case, my driving force, my bleeding heart, is when others can look at me, or I can look at others, and simply say: “You’re doing you.”

That doesn’t mean you’re not inspired by others. Far from it — you can stand on the shoulders of giants. But the point is to stand on them to reach higher, not lean against them as a crutch. For example, longtime listeners will know that I’m inspired by the work of Anthony Bourdain. He’s a guy who finds the deeper meaning in every location he visits and interview he conducts. He often opens shows by saying, “Something unexpected is happening in this place.” His show…

How to Set Up Your Own Online Book Tour 0

Create and Market Work That Lasts 0