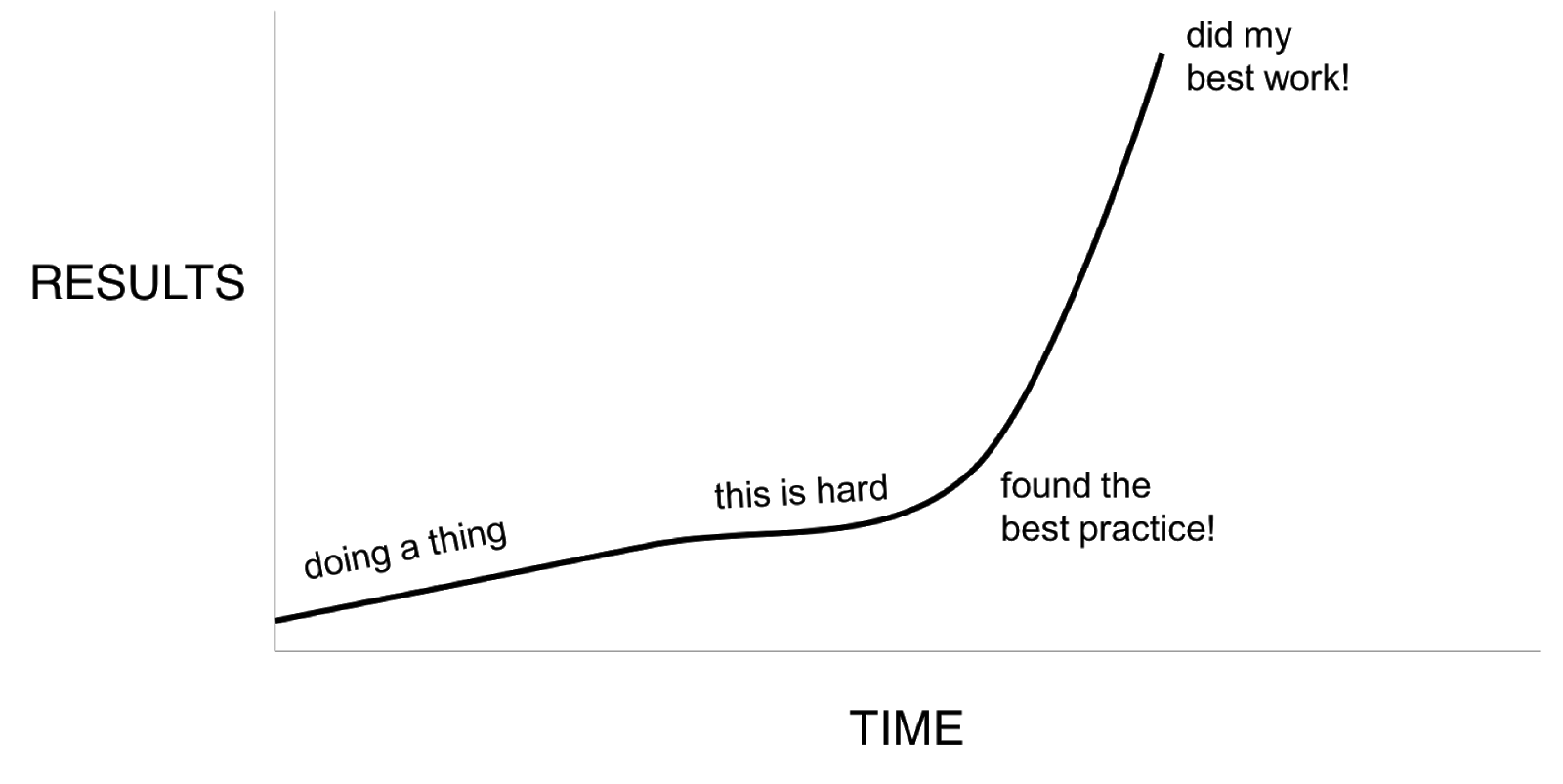 Marketing Has a Best Practices Problem

It’s a gap between the work we aspire to do … and the work we’re actually doing; the results we’d like to see … and the results we’re really seeing. So what does it really take to do our best work? Because what do we normally do when we need better results as content marketers? Our biggest issue is how we make decisions in our work as content marketers. Snow’s article is appropriately titled “The Problem With Best Practices,” and he cuts to the core of this ridiculousness when he writes, “The ‘best practice’ is one of the business world’s most common conventions, but it’s often arbitrary and based mainly on habit—the result of conditions that no longer apply.” Conditions may change, but too often, we don’t. Why didn’t my clients start their thinking by considering their context first, and then make sense of this new trend, given what they knew to be true about their own businesses? Like the newspaper publishers that doubted The Independent or my clients who trusted my advice as a Google sales rep, in our efforts to get better results, we often seek best practices through conventional wisdom or trendy new tactics. Time’s up, but it doesn’t matter if you knew the answer anyway, because in under a second, you can get 35 million results on Google. If we don’t have an answer or an idea, we can find and follow everyone else’s. We’re told best practices work best for others, but the question we need to ask more often is, “What works best for us?” Better yet, what works for you?

How often do you step back from your work as a marketer to judge whether you’re truly doing your absolute best? What do you think you’d find if you did?

I think we’d all encounter a gap. It’s a gap between the work we aspire to do … and the work we’re actually doing; the results we’d like to see … and the results we’re really seeing. Few things can feel more frustrating than that, especially when you consider how hard we’re working.

So what does it really take to do our best work?

If we examine our normal behavior when we try to close that gap, I think we’ll find our answers. Because what do we normally do when we need better results as content marketers? We look for best practices.

That makes sense at first glance. We believe best practices will help our work look something like this:

Over and over, we find another best practice, try the latest trend, or follow the smartest guru, and we just keep hoping and praying that one of them, one time, will finally deliver as promised. Worse, in the internet age, this process has gotten insane. However, our problem isn’t the volume of information; it’s how we make sense of it all. Our biggest issue is how we make decisions in our work as content marketers.

We tend to make our decisions in one of three ways, each of which can be rather troublesome.

Sometimes, we make decisions based on the best practice that carries the most weight in our minds. This is the path of conventional wisdom. But just because something is the most common approach doesn’t mean it’s the best approach for us. The newspaper industry learned this the hard way.

The problem with conventional wisdom

In an article for Fast Company, Contently co-founder Shane Snow shares the hilarious yet horrifying story that reveals the problem with conventional wisdom. In the newspaper business, it’s common to print your issues on something called “broadsheets,” which are 22-inch sheets of paper. However, in the early 2000s, The Independent decided to shrink their pages to something called tabloid pages, and they were criticized by their peers. Unfortunately for those peers, they clearly didn’t realize where broadsheets came from in the first place.

In 1712, the British government imposed a tax on newspapers based on the number of pages that they published. In response, most publishers began using larger pages. They could print the same number of words on fewer sheets and thus avoid the tax. That is how broadsheets were born.

In the 1800s, the tax was repealed, but by then it didn’t matter: Broadsheets had become the conventional wisdom. As a result, when The Independent decided to break from that tradition, they were ridiculed. But what’s more ridiculous? Relying on a best practice established centuries ago, based on a law that no longer applies, or questioning that notion to think for yourself instead? When the Harvard Business Review spoke with the publishers of The Independent, they learned that not only did the paper save money after the switch, they sold more print editions.

Snow’s article is appropriately titled “The Problem With Best Practices,” and he cuts to the core of this ridiculousness when he writes, “The ‘best practice’ is one of the business world’s most common conventions, but it’s often arbitrary and based mainly on habit—the result of conditions that no longer apply.”

Conditions may change, but too often, we don’t. As a result, our knowledge can grow stale. Let this story be a warning to us all: We shouldn’t let a false sense of certainty about knowing “the” answer prevent us from seizing new opportunities. In our efforts to close the gap between average and exceptional work, we shouldn’t base our decisions on whatever feels most common.

Google and finding your context

On the other hand, we shouldn’t base our decisions on whatever seems newest, either. This is the second way we often look for best practices: We obsess over trendy tactics. We herald the arrival of a new technology or technique as the latest and greatest approach. We love when a marketing leader can tell us what 2019 will be “The Year Of” in our industry.

Quick, do you remember what 2017 was the year of? Nope! But we still crave the new, and that can be dangerous too.

For example, in 2010, Google introduced SiteLinks, a new feature of its AdWords product that would allow marketers to append four additional links just below their search ads. They look something like this:

As long as I live, I will never forget SiteLinks, or the number Google used to convince advertisers to adopt this feature: 30 percent. That stat is burned into my brain forever.

I was part of the sales team at Google that helped launch SiteLinks to advertisers. During beta testing, Google found that ad clicks increased by “30 percent on average” using SiteLinks—a line I used thousands of times in emails, phone calls, and meetings. As an account manager, I had over 1,000 small business clients, all of which received “scalable sales initiatives” from me and my teammates. Since my clients were small businesses, Google didn’t invest in one-on-one or in-person support. Instead, I’d receive spreadsheets and training modules from Mothership Googs, instructing me to send batch emails or pitch decks, or to call a certain subset of accounts to prescribe the same change. In 2010, that change was to enable SiteLinks.

The logic was simple: “We’ve seen advertisers get 30 percent more clicks on average. If you enable them, you’ll also get more clicks. More clicks means more sales on your website.” But this was faulty…

How to Create a Successful Social Media Marketing Plan 0