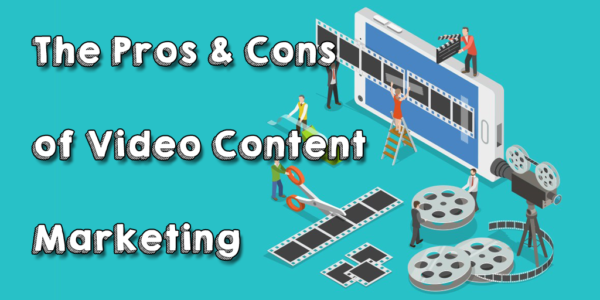 Should You ‘Pivot to Video’? Pros & Cons of Video Content Marketing

Why Are So Many Media Companies Pivoting to Video? According to the Content Marketing Institute, audiences are roughly 10 times more likely to engage with and share video content than any other content type. Adding video to specific pages can be incredibly effective at increasing conversion rates – particularly landing pages. Without training or experience, actually making videos can be tricky, and newcomers to video production often end up making costly mistakes or screwing up entire shoots. Con #2: Not All Audiences Enjoy Video Content Major media brands and social evangelists might be completely in love with video, but the same cannot be said for all audiences – particularly when it comes to news content. Instructional & Tutorial Videos Need to explain how your product works? Similarly, tutorials on highly specific or technical tasks can often be much more effective as step-by-step videos rather than lengthy written guides. Vox’s explainer videos are a great example of this content type done right. Screenshot taken from a Vox explainer video on climate change and extreme weather events, via Vox Media While we’re talking about explainer videos, it’s worth mentioning video duration. Do you think this is a more engaging way of interviewing someone, or would you prefer to read a transcript?

Meet the Content-Marketing Geniuses Behind the Powerful Brands You Know
Get to know a #CMWorld 2016 attendee: Meet Kelly Hungerford
Is It Time to Invest in PPC Campaigns for Your Content?

What do you think about this?

From major mainstream outlets like Mashable, MTV News, and Vice to smaller operations, more and more publishers are “pivoting to video” from text-based content. In this post, we’ll be taking a look at why some publishers are betting big on video, as well as examining the pros and cons of video content marketing, with examples of video content that can perform strongly.

Before we begin, we need to take a look at how we ended up here.

Why Are So Many Media Companies Pivoting to Video?

The most prevalent theory about the “pivot to video” trend is that it’s merely a response to changing media consumption habits.

The theory is that more and more people are shying away from actually reading written words (so much hassle!) in favor of watching more video content.

There is evidence that video is being perceived differently. In a recent study, video analytics software company Vidyard found that many marketers are seeing video as a much more important element in their wider content strategies:

However, some people think the reason for the shift is that video ads are harder to ignore than banner ads.

“Facebook really, really wants native videos—which is to say, videos viewed on the Facebook platform—to take off,” John West wrote in a recent article on the trend for Quartz. “And publishers know an edict when they hear one.”

Why Should Marketers Care About What Big Media Companies Do?

Major media companies exert tremendous influence; not only over what people buy, but how people behave. Content marketing as a discipline may have grown from the world of SEO, but today, trends in B2B content are often strongly influenced and shaped by mainstream media consumption habits. If major media brands say that video is The Future, you can bet your last dollar that marketers won’t take long to follow suit.

It’s the same principle that we saw in written content a few years ago. As newspapers and magazines shifted their focus from shorter, shallower content to longer, reported features and long-form articles, it didn’t take long before marketers and B2B companies also began to pay more attention to long-form. Similarly, as professional video has proliferated across the web, more and more marketers are prioritizing video content.

There are definitely several upsides to producing more video content, but there are also several drawbacks. Let’s take a look at three of each.

The first pro of video content is the fact that it boasts incredibly strong engagement compared to other content formats.

According to the Content Marketing Institute, audiences are roughly 10 times more likely to engage with and share video content than any other content type. With engagement stats like this, it’s not hard to see why video remains a very alluring proposition to publishers and marketers.

Of course, while video engagement is broadly very strong, it does vary quite widely by video type. We’ll get to this (and some examples) in a moment.

Video content can also be extremely “sticky” when it comes to metrics such as time-on-page. According to Wistia, people spend more than two and a half times as long on pages with videos than pages without:

In a case study featured at the Unbounce blog, Vidyard experimented with adding a video to one of its landing pages. The baseline conversion rate of the landing page was an average of 6.5%. Vidyard tested two variants of the same video on this landing page: one in a lightbox modal pop-up and one embedded in the page itself.

The results were amazing.

While video may not be as easy to produce as written content (more on this momentarily), once it has been made, it’s easy to reuse and repurpose content for future projects.

Elements such as title cards, images, and even footage can all be reused
in future video projects, as we do here at WordStream

Elements such as title cards, animations, music and sound effects, voice-over audio, B-roll footage, and virtually every other aspect of an individual video can be easily reused in future projects. This can offset the initial investment of time necessary to create them in the first place, and also serves to ensure continuity across various video properties.

It’s important to bear this in mind if you hire a third-party production company to produce your videos. Before signing any contracts, be sure to understand exactly who owns the assets once production has wrapped and whether you have legal permission to use them without paying additional fees to the production company.

So now we’re done talking about how great video is, let’s put the “con” back into “content.” See what I did there?

Although not everybody is comfortable writing, actually producing written content is just about as easy as can be. All you need is a computer and a word processor or even basic text editor and…

Blogging and SEO: 5 Easy Steps to Rank Your Blog 0

Transcript of Why Everybody is Growth Hacking 0