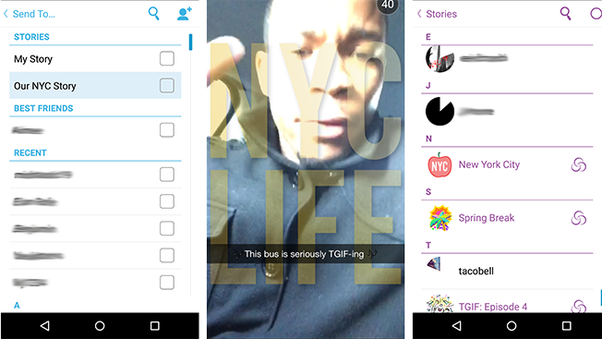 Author: Andrew Hutchinson / Source: Social Media Today “Snapchat is for friends” This has been a key tenet upon which the app has found it

How to Become the Coca-Cola of Your Industry Practically Overnight
Google’s ‘International Women’s Day’ spot was most watched ad on YouTube in March
Social Media News You Need to Know: April 2017 Roundup

“Snapchat is for friends”

This has been a key tenet upon which the app has found its place, that Snapchat, unlike other social platforms, is purely about staying in touch with the people you know, smaller groups, as opposed to building large followings of random strangers. That’s why there are no follower counts, no ‘Likes’, and why search in the app is virtually non-existent.

Or at least it wasn’t – this week, Snapchat has announced a new update to discovery on the platform, which doesn’t necessarily help you find other users, but it will help those in the app find more content, which could keep them engaged for longer.

As you can see, the new option enables you to search for Snap content, with clips being grouped by keyword, location, and various other searchable categories.

The new option is an extension of Snapchat’s Our Story feature – whenever you create a Snap, you have the option to also include it in a public story collection where, potentially, more people can see it.

Up until recently, you needed to submit your Snap to a specific public story for consideration for inclusion by Snapchat’s editorial team – you can see an example in this image where you can add your Snap to ‘Our NYC Story’.

But back in January, as part of their new search bar update, Snapchat also announced a change which enables users to simply indicate that they’re happy to have their content considered for Our Story, giving Snapchat’s team the opportunity to judge what gets included and where.

That, according to Snapchat, has lead to an influx of user-generated content, so rather than just let their editorial team pick and choose Snaps around specific themes, and let the rest go to waste, Snapchat’s introduced a new machine learning process to sort that material by various categories and qualifiers.

What, exactly, those qualifiers are is not clear – TechCrunch explains that:

“Snapchat is using algorithms to scan the caption text, time and visual elements found in Snaps submitted to Our Story and group them by theme. For example, it could pull out Snaps with the words “dog” or “puppy” in captions, or use machine vision to detect the shape of a real dog in the photos or videos, and aggregate them into an Our Story that comes up when people search for “Puppies.”

Snapchat could also use location tracking to tag relevant images, with many users having location data switched on to use Geofilters.

This is not the first time Snapchat has used machine learning to analyze and sort Snap data. Back…

Is Your Content Good Enough? 6 Questions to Find the Answer 0