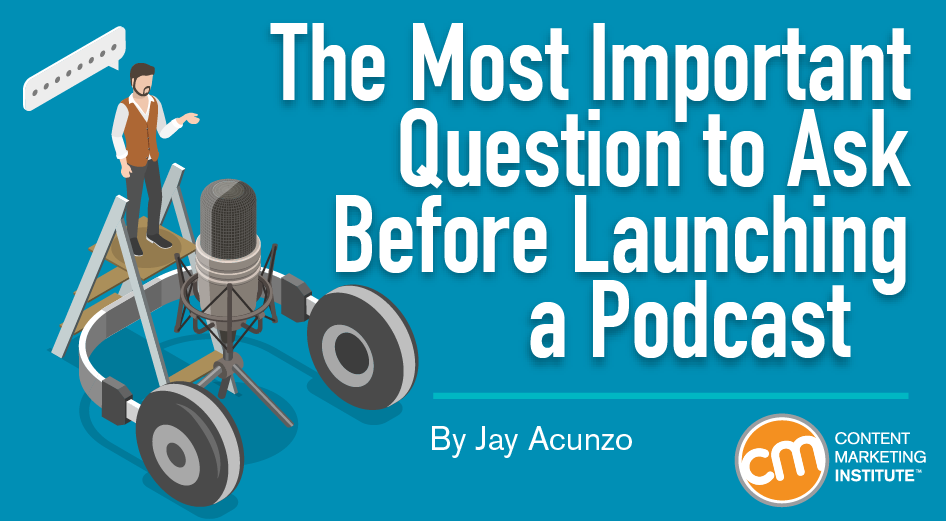 The Most Important Question to Ask Before Launching a Podcast

But one question is the most foundational and crucial thing to ponder – and I don’t see marketers asking it often enough: “Are you any good on a microphone?” That is half the battle. However, if you keep the golden rule of audio in the back of your mind, you can make the best decisions possible for your listeners. We as listeners don’t yet know the answers that the host knows. Great hosts give signposts to important details Signposting is an audio technique that hosts use to ensure that listeners don’t miss crucial details. Jad says, “A guy walks in the door.” Unlike the previous example, where Jad uses silence around a word and performs the word a certain way, this signpost is more obvious and arguably easier for anyone to replicate. Your simple signpost, as an interviewer, might sound like this: “So, Jay, you create and host podcasts for brands, and my all-time favorite show is Example Podcast. And as we take this journey with a host, that host has to remember to do his or her job as an interviewer. “This is your set, not theirs.” The boss explained that if you get the right quotes and moments from the guest, everyone wins: the audience, the team producing the content (you), and the guest or subject. Marketers can’t simply be hosts. The one question marketers need to ask before starting their podcast: Are you any good on a microphone?

How to Build a Successful Content Marketing Campaign
#CMWorld Interview: Adele Revella Weighs In On Connecting B2B Content to Customers
10 Marketing Trends to Watch in 2019

Marketers everywhere are deciding if launching a podcast makes sense for their brands and their goals. There’s a lot to consider, and therefore, a ton of questions to ask. But one question is the most foundational and crucial thing to ponder – and I don’t see marketers asking it often enough:

“Are you any good on a microphone?”

That is half the battle. Check that – it’s 99% of the battle. If you have a great host, the rest gets so much easier. Just think: Would you rather listen to a dull host with great audio quality or an engaging host using so-so tech?

A podcast is really three things: a show-level concept, an episode-level format, and on-air talent. Of the three, the host is by far the most crucial thing to get right. Whether the person is an inquisitive interviewer or an inspiring storyteller, the very first thing to decide as a marketer before launching your brand’s podcast: Are you (or your planned host) any good on a microphone? If not, who is?

A great podcast requires performance talent. Everything else is incremental.

Of course, there are ways to get better as a performer on that microphone. Here are a few of my favorite techniques.

1. Great hosts honor the golden rule at all times

Audio is a strange medium for many because it shouldn’t be hard, but it’s incredibly hard. You never have “talker’s block.” Voice is the most natural way we communicate as humans. But that doesn’t guarantee you’ll be great simply by speaking into a microphone. However, if you keep the golden rule of audio in the back of your mind, you can make the best decisions possible for your listeners.

Audio is what I call a linear medium. Listeners can move only two ways through the piece – forward and back. They can hit play and stop. If you’re lucky enough to get someone to hit play, as the host you have one job: Make sure they don’t hit stop.

In other words, the golden rule of audio is: Get listeners to the end.

Audio is intimacy that scales. You can turn digital connections into real-world contacts – any host who has experienced the weird-but-wonderful moment when a listener talks to them like an old friend can attest. Your podcast should hold people’s attention for a significant time. It’s a beautiful thing for marketers who are used to acquiring attention 30 seconds at a time. Once you hold someone’s attention and build trust, all the other things a marketer hopes to achieve get easier.

But you have to remember the golden rule. You must get them to the end.

This mental reminder is more than a technique, but if you focus on it at all times, you’ll make the right choices. For example, if you follow the golden rule, should you front-load all your boring housekeeping? Shouldn’t you start the episode with a cold open, a teaser, or an agenda?

Another example: Maybe you should avoid lengthy guest biographies before a guest summarizes their bio yet again, or maybe you should tinker on a new intro style that sounds different from your competitor shows which, for instance, all open their episodes using pull quotes from their guests. I recently deconstructed Buffer’s podcast with one of the show hosts, Brian Peters, and he revealed that improving the intro drastically increased the show’s listener retention. Around 95% of listeners now finish each episode, according to their Apple Podcasts data. What if hundreds, thousands, or even tens of thousands of people spent significant time hearing you speak every week? Wouldn’t your work as a marketer get so much easier? It all starts with remembering your main job as a podcast host:

(I want your attention a little bit longer now…)

2. Great hosts relate to the audience

This may seem obvious, but it’s shocking how many hosts assume too much of the audience. They make either overt assumptions or implied assumptions. Overt assumptions occur when a host describes something – an industry term, a news story, or a concept – that was introduced in a prior episode, and they fail to define it again for new listeners. (That’s a troubling aspect of most podcast apps: They start you on the most recent episode. It’s akin to starting with a mid-season episode of a TV show. Even if your podcast isn’t serialized, new listeners may not understand recurring tropes, segments, and “characters.” You’ll lose them.)

Implied assumptions are harder to spot but arguably more dangerous. You can’t spot them by listening to the words a host says. Instead, they’re more subtle, as the problem lies with how a host behaves. Namely, hosts may assume that their role is to be the star. It’s not. A great show host is the guide. She stands shoulder to shoulder with the listener and points out interestingness and clarifies or distills complexity. She’s a vessel, someone who has uncovered something – an idea, a story, an interesting guest – and she’s here to share that with you. Yes, the host can be the lone voice, and yes, the host can be a celebrity or grow her celebrity through her podcast. But the host must relate to the audience for that audience to agree to go on a journey (the rest of the episode or series) with the host. Even the great Jerry Seinfeld admits he only gets a few extra minutes to simply “be” Seinfeld on stage. After that, he has to deliver something valuable to the audience.

One of my favorite examples of relating to the audience comes from Robert Krulwich and Jad Abumrad, co-hosts and co-creators of the all-time great show, Radiolab. In an episode called Memory and Forgetting, the pair tries to understand the science of memory, explaining it to the non-scientific mind using metaphors and stories. Robert opens the episode by saying, “I think most people think of memory like a filing cabinet.”

Right away, he aligns himself with us, the listeners, from where we stand. We’re most likely to think of memory – the subject of the episode – in a certain way. We have some preconceived notions about the topic. Robert acknowledges that, discussing it in brief detail using the show’s signature blend of story and sound design. Now that he’s shoulder to shoulder with us, he can walk with us each step of the way until the lightbulb goes off in our minds and we think, “Aha! Memory is really X.” But make no mistake: For us to successfully understand an episode’s topic, the host can’t just hand us the answer. We have to arrive there logically, in the right order, and in our own…

How to Build a Memorable Personal Brand on Twitter 0

Clips, Captioning, and the Catastrophic Autoplay: An Update on Social Video 0