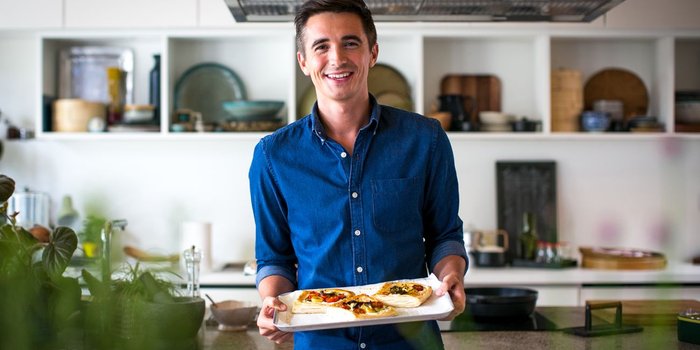 Many people start with YouTube and work their way up to traditional media -- TV, movies, book deals, even product lines -- but Irish chef Donal Skehan had a different trajectory. “If we’d done a TV appearance or an interview on TV, I would put it up on YouTube and it would get maybe 1,000 views.” Related: Rejected by Network TV, These 3 Women Took Their Talents to YouTube and Grew an Audience of 3.6 Million After working with Oliver, Skehan got serious about his own channel. It’s a team of seven people, based in Ireland, who create my TV series content and produce the YouTube content. Now, YouTube is promoting videos that are less of the how-to and more of the longer-form video and the idea of the story arc behind the video. Across all of my social media, we have a food community of over 1 million people who are actively having conversations about the food that we’re creating on a daily basis. Branded campaigns give us the opportunity to create interesting and creative content that we wouldn’t normally have the budget for. That opened me up to this community, this world of creators. YouTube has now created a platform where you can literally do anything. As time moves on, what’s really interesting to see as a creator is that, all of a sudden, the YouTube audience who started watching when they were 16 are now 25 and looking to see quality content. This is one was so popular, I featured it in my cookbook Eat.Live.Go.” “This was one of the first videos we filmed for YouTube.

Irish chef Donal Skehan had already made a name for himself by the time he moved to L.A. to join the city’s vibrant community of YouTube creators.

In this series, YouTube Icon, Entrepreneur speaks with the individuals behind popular YouTube channels to find out the secrets of their success.

Many people start with YouTube and work their way up to traditional media — TV, movies, book deals, even product lines — but Irish chef Donal Skehan had a different trajectory.

Skehan started in the digital realm as a food blogger. Then came cookbook deals (six of them to date) and TV shows, including stints co-hosting Food Network Star Kids and Junior Masterchef (U.K.), two of his own travel series for Britain’s Food Network and appearances on Today, Rachel Ray and other talk shows.

Then YouTube brought him back online in 2012, when he had the opportunity to work with British chef Jamie Oliver on Oliver’s platform, FoodTube. While Skehan had created a channel for himself in 2006, he says he “was literally just putting up whatever, with no business plan behind it and no kind of strategy” for the first six years. “If we’d done a TV appearance or an interview on TV, I would put it up on YouTube and it would get maybe 1,000 views.”

Related: Rejected by Network TV, These 3 Women Took Their Talents to YouTube and Grew an Audience of 3.6 Million

After working with Oliver, Skehan got serious about his own channel. He even moved to L.A. to immerse himself in the community of YouTubers that resides there. Around that time, he formed a media company to produce his content for TV, YouTube and social media. Today, his cooking videos have attracted upwards of 700,000 YouTube subscribers.

Skehan’s first job wasn’t a food blogger, however. He was a member of a chart-topping Irish pop group called Industry, which enjoyed a couple of years in the spotlight before the band, as Skehan puts it, “fizzled very quickly.” Still, he says that he loves “project-based things,” a skill that translated from his music career to his culinary career.

“The band for me was an opportunity for me to build a brand,” Skehan says. “I was behind the whole concept of it, behind all of our music videos. We had a viral marketing campaign behind the success of our first two singles. That, in a sense, has translated to what I’m doing now in terms of branding and strategy.”

Read on to learn more about Skehan’s brand-building journey that has culminated with him becoming a YouTube influencer.

1. How did you get your start with YouTube?
Years ago, I was spending my own dime to get myself over to London and go to some pitching meetings. Around 2012, we got approached at a meeting with Jamie Oliver’s company, but at the time, they said they had nothing for me. Then, when they launched their digital platform they invited me to be among the key talent as part of that.

Up until that point, I was so absorbed with the TV shows we were making that YouTube wasn’t even a blip on my radar. But as soon as we started making the videos alongside Jamie and the FoodTube team, I really saw the potential of it. And moreover, I could see the potential I saw when I started food blogging all of those years ago — that instant gratification of getting to talk to your audience. When you put up a video, there was a conversation happening. Subsequently, we moved on to developing our own channel.

2. How much of your time do you spend on a video and what does that entail?
Two years ago, we set up a production company called Appetite Media. It’s a team of seven people, based in Ireland, who create my TV series content and produce the YouTube content.

One day, I was on a TV show and I was watching the screens, and I asked who had produced this particular fashion segment. I knew the look and the feel of it would translate really well to food. I got in contact with the guys who created it and told them I loved what they were doing. They ended up taking over the production side of the TV series I had been making.

We film on a monthly basis, and if we do a day filming, we do about five recipe videos in a go. Appetite are the nuts and bolts of creating the videos, but my wife and I have been the driving force behind trying to create the content that we deem suitable and that we deem…

The Reality of Social Media Selling 0