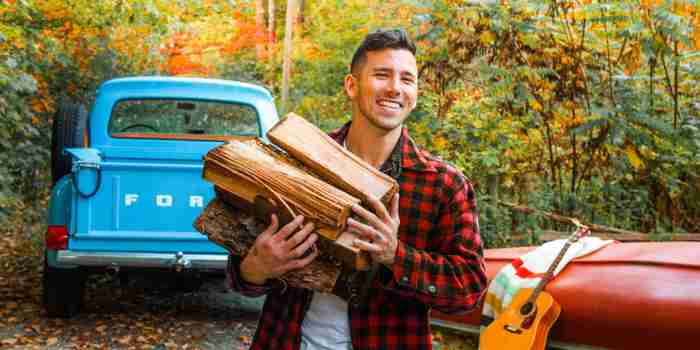 At the time, Dempsey’s Instagram account, @KyleFinnDempsey, had more than 10,000 followers thanks to travel snapshots and other photography projects, but after the A-frame snapshot posted, it blew up. I’d build my own little world. Then I went on a few trips that fall and stayed in unique, cool Airbnb listings -- treehouses, log cabins, A-frames and more. Since then, I’ve stayed at hundreds of places, and through that, I’ve built my dream home in my head, taking little bits and pieces of each place I’ve stayed. Things are changing, but I usually go by $1,000 per hundred thousand followers. On Instagram itself, I do about one ad a month, and now I charge $5,000 for a spot on my feed -- that would be a full-scale one-minute Instagram video and a story post, essentially a mini-campaign. You just don’t want to over-promote on your feed -- you don’t want your followers to get sick of it, and you also want to be strategic with who you choose to work with because people can see right through something if you’re just doing it for money. For example, I’ve had a partnership with one client for six months -- a blanket brand -- and I provide them with a photo package and one sponsored post on my feed per month, so I’d do two one- or two-day themed photoshoots with them per month. I’ve done one-minute Instagram videos for probably my five most recent ads, and people have responded much more to that. Be someone they can go to -- if you’re there just for the followers, people can feel that, and they’ll notice.

In this series, Instagram Icon, Entrepreneur speaks with the individuals behind popular Instagram accounts to find out the secrets of their success.

On a weekday afternoon in May 2016, Kyle Finn Dempsey hopped into his black Land Rover, turned on acoustic radio and readied himself for a typical day exploring and photographing western Massachusetts.

Dempsey ended up at a camp not far from his home, where he discovered an abandoned A-frame cabin that sparked his imagination. Upon closer inspection, he saw that wood rot plagued most of the interior, but one second-story section — a small, cozy corner — had remained pristine. Dempsey knew he could transform the corner into its own magical world, and he dreamed up a scene full of string lights, vinyl records, comfortable blankets and more. He immediately headed home to pick up the items that would make the world in his mind a reality.

Dempsey returned soon after with a guitar under his arm, a coffee pot, flannel shirts and a host of other items that could present the forgotten corner as an intimate escape. The entire scene took him over an hour to set up, but he was determined to get every detail of his mental image right — even if the payoff was just one snap of a camera shutter.

At the time, Dempsey’s Instagram account, @KyleFinnDempsey, had more than 10,000 followers thanks to travel snapshots and other photography projects, but after the A-frame snapshot posted, it blew up. A few months later, he quit his job at a pasta sauce company to focus on Instagram full-time. Today, he has more than 442,000 followers and is known for whimsical shots featuring rustic cabins, cozy nooks, old vehicles, fall foliage and campfires.

Dempsey spoke with Entrepreneur about his inspiration, monetization strategy and advice for budding Instagrammers.

I have a lot of concepts in my head — visions of ideal scenes and things like that. I grew up along the river in western Massachusetts, and my whole childhood I would build forts, fires and these little camps. I’d build my own little world. I wanted to replicate that feeling — that adventurous, kind of Huck Finn-esque feeling — in images that reflected my actual life, whether it be fishing on the side of a river, canoeing, building campfires or just staying in magical places. Through my feed, I wanted to curate an escape for people. Once I realized I could really hone in on this idea, it was like a portal to a different world.

How do you find places to transform?

After I posted that first A-frame photo, I went out every day that summer, picked a scene from my mind and tried to replicate it as best I could. It didn’t take off every time I posted one — it was a long process of trying a bunch of different things — but I saw what stuck and pushed those ideas forward. I started near where I lived with a few abandoned places I’d found, and when I learned that some of my friends’ parents had some cabins nearby, I stayed there. Then I went…

Loading...
Newer Post
Tell Me a Story: 4 Ways That Video Can Create Brand Fanatics — Maybe Even Your Brand Fanatics
Older Post
What Entrepreneurs Need to Know about the Google March 2019 Core Update

AI, Machine Learning, and Big Data: Why Video Publishers Need to Keep Up With The Latest Trends 0

The effect of image-based posts on social media insight 0