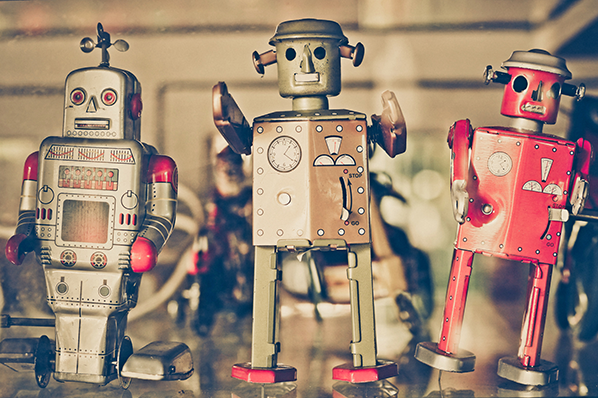 7 Brands Already Using Chatbots in Their Marketing. They might seem like "the simpletons of the artificial intelligence world," but chatbots offer marketers from any industry the opportunity to engage with consumers on a personal, direct level -- as long as they can capture (and hold) users' attention with an engaging narrative. They have to display more than a basic knowledge of human conversational patterns, but they can't claim to be an actual human -- again, let's keep things from getting too creepy here. Whole Foods' Facebook Messenger bot -- launched in 2016 at MobileBeat -- lets users search for recipes, products, and food inspiration without leaving Messenger. The Epic Reads bot caters specifically to teens, but Harper Collins hasn't forgotten adult readers -- in early 2017, they launched a second book recommendation bot, Book Genie, which offers up a broader range of book suggestions for all ages. The good news is that the bot will give you a cool nickname. I, an adult human and problematically frequent Starbucks customer, barely understood that. 7) Duolingo Learning a new language takes a lot of practice, and if you're doing it on your own, you might miss out on gaining valuable conversational knowledge. The company originally tried pairing up non-native speakers with native speakers for practice sessions, but according to von Ahn, "about three-quarters of the people we try it with are very embarrassed to speak in a foreign language with another person." Which branded bots are you engaging with these days?

By now, you’ve probably realized that the bots have us surrounded. If recent success stories like Arby’s hilarious pizza slider bot are any indication, the future of brand awareness as we know it just might rest in the little digital paws of chatbots.

They might seem like “the simpletons of the artificial intelligence world,” but chatbots offer marketers from any industry the opportunity to engage with consumers on a personal, direct level — as long as they can capture (and hold) users’ attention with an engaging narrative.

The emergence of accessible artificial intelligence gives us unprecedented access to consumers, but the tech needs to be fed by compelling creative work to be used successfully as a marketing tool.

As AOL’s David Shingy writes in Adweek, “The challenge [with chatbots] will be thinking about creative from a whole different view: Can we have creative that scales? That customizes itself? We find ourselves hurtling toward another handoff from man to machine — what larger system of creative or complex storytelling structure can I design such that a machine can use it appropriately and effectively?”

Some brands already seem to be getting the balance right. A bot needs to capture a user’s attention quickly and display a healthy curiosity about their new acquaintance, but too much curiosity can easily push them into creepy territory and turn people off. They have to display more than a basic knowledge of human conversational patterns, but they can’t claim to be an actual human — again, let’s keep things from getting too creepy here.

To inspire your first (or next) foray into the weird and wonderful world of chatbots, we’ve compiled a list of seven brands who’s bot-based campaigns were fueled by an astute knowledge of their target audiences and solid copywriting. Check them out below, and start considering if a chatbot is the right move for your own company’s next big marketing campaign.

Who wouldn’t want a little Albert Einstein at their disposal to answer pressing questions about space, time, and the meaning of life?

Back in April, National Geographic launched a Facebook Messenger bot to promote their new show about the theoretical physicist’s work and personal life. Developed by 360i, the charismatic Einstein bot reintroduced audiences to the scientific figure in a more intimate setting, inviting them to learn about the lesser-known aspects of his life through a friendly, natural conversation with the man himself.

“Rather than having the campaign speak for Einstein, we wanted Einstein to speak for himself,” Layne Harris, 360i’s VP, Head of Innovation Technology, said to GeoMarketing. “We decided to pursue a conversational chatbot that would feel natural and speak as Einstein would. This provides a more intimate and immersive experience for users to really connect with him one on one and organically discover more content from the show.”

Unfortunately the Genius bot is no longer active, but apparently he had a pretty good sense…