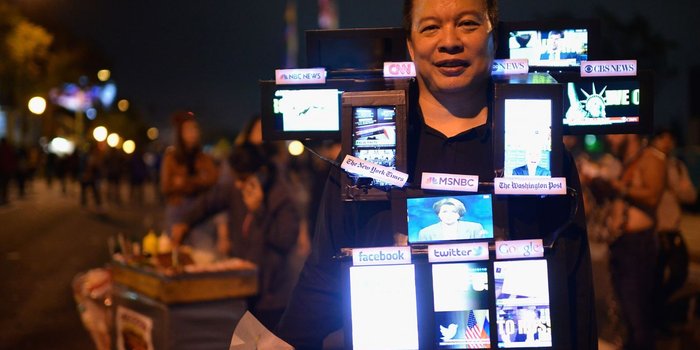 Fake news tends to have the real news beat in one area: novelty. That's why Twitter users can't help but share half-truths and unchecked rumors over the platform, according to a trio of MIT researchers. Fake political news was especially viral; it reached over 20,000 people faster than what other false news categories could do. "When we estimated a model of the likelihood of retweeting, we found that falsehoods were 70 percent more likely to be retweeted than the truth," the authors added. The people who shared the false news stories generally had fewer followers than people who tweeted fact-based stories, the study said. To account for bots, the MIT team used a computer algorithm to strip out suspected fake accounts from their research data. But even without the algorithm, their overall findings remained the same. "We conclude that human behavior contributes more to the differential spread of falsity and truth than automated robots do," they said. The study doesn't exactly paint the social media service in the best light. CEO Jack Dorsey tweeted his support for the study, following his own public efforts to clean up the service.

Brought to you by PCMag

Falsehoods spread faster on Twitter than real news, and the problem can’t be blamed on bots, a new study finds.

Fake news tends to have the real news beat in one area: novelty. That’s why Twitter users can’t help but share half-truths and unchecked rumors over the platform, according to a trio of MIT researchers.

The findings appear in the latest issue of Science and underscore an ongoing critique facing Twitter: that the social media service is doing more harm than good by becoming a hotbed for fake news and propaganda. The study delved deeper into the issue by examining how 126,000 stories — both real and false — were tweeted by over 3 million people.

“We found that falsehood diffused significantly farther, faster, deeper and more broadly than the truth in all categories of information,” the authors wrote.

For instance, the true news-related tweets rarely reached over 1,000 people. In contrast, the top 1 percent of tweets carrying false news routinely spread from…

Evidence of the Surprising State of JavaScript Indexing 0