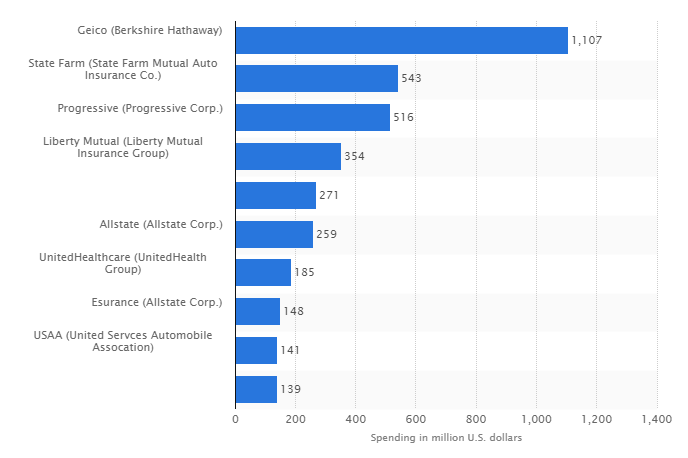 Why Do Insurance Companies Advertise So Much?

Why Do Insurance Companies Advertise So Much?. How many insurance ad campaigns can you name off the top of your head? They tend to be the kind of ads that stick in your head. Now think about insurance companies. From low involvement to top-of-mind “Let’s face it,” said Matt Johnson, State Farm’s former head of digital marketing. Then, those people will think Nationwide when they need insurance. Below are the media spend totals for selected brands in 2015: Take Geico, whose yearly ad budget surpassed $1.1 billion. Premium income increased 11.2 percent in 2013, the first year Geico passed Allstate to become the second-largest auto insurance provider. The massive budget allows for the company to push out multiple campaigns at the same time, which is crucial in such a competitive category. Brands that spend less than 5 percent, on the other hand, are three times as likely to see zero growth.

How many insurance ad campaigns can you name off the top of your head? Probably a lot.

Most of these campaigns are zany, full of jingles and catchphrases. They tend to be the kind of ads that stick in your head.

Now think about insurance companies. Do you know which brands supply each of your policies? How much is the deductible in your health plan? Everyone should know the answers to these questions. Yet according to a 2016 survey by PolicyGenius, half the country still can’t define a deductible.

Insurance is a competitive space, which is why companies create talking ducks to get our attention and cut through the clutter. But a desire to improve recall is only part of why there’s so much insurance content out there.

From low involvement to top-of-mind

“Let’s face it,” said Matt Johnson, State Farm’s former head of digital marketing. “Insurance is not a high-interest category for someone aged eighteen to thirty-five. They want to spend as little time as possible thinking about insurance.”

Insurance isn’t a fun product—millennials aren’t arguing whether Allstate or Progressive is cooler the way they would for Nike and Adidas. It’s also a low-involvement product, one continually paid for without much consideration by the consumer. As long as nothing goes wrong, retention rates are high.

“The goal is to create engagement,” Johnson said. “You are battling for share of the mind of this human being. For something like insurance, these people don’t know that they’re going to [need it]. So when that happens, they’re going to research two or three companies. We need to be top of mind.”

It’s why Geico will never stop reminding you that “15 minutes could save you 15 percent or more on your car insurance.” Think of HeadOn, the seemingly magical chap stick that claimed to cure headaches. The ads, consisting almost entirely of the phrase “HeadOn, apply directly to the forehead,” were undeniably annoying. The product was proven to be no more effective than a placebo. And yet HeadOn sales rose 234 percent from 2005 to 2006.

Not surprisingly, insurance companies love jingles for the same reason. Take the long-running “Nationwide is on your side” jingle, which took on new life when NFL superstar Peyton Manning got involved in 2014.

GCC businesses use social media to achieve their marketing objectives 0