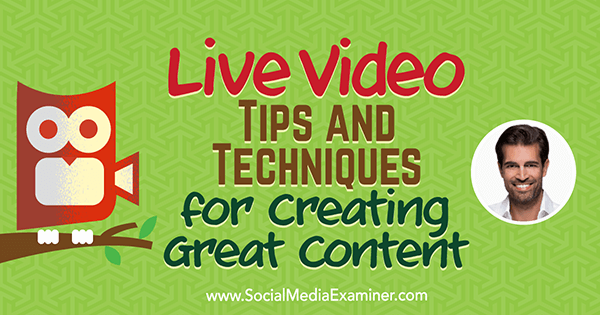 Author: Michael Stelzner / Source: socialmediaexaminer.com Do you broadcast live video? Want to learn how to create an engaged following?

Do you broadcast live video?

Want to learn how to create an engaged following?

To discover what he’s learned from broadcasting over 1,000 live streams over the last two years, I interview Alex Khan.

More About This Show

In this episode, I interview Alex Khan, the founder of Attractive Media, a German social media agency that helps businesses with live video. You can find him online at alexkhan.tv.

Alex shares his formula for beginning and ending live video.

Share your feedback, read the show notes, and get the links mentioned in this episode below.

You can also subscribe via iTunes, RSS, or Stitcher.

Here are some of the things you’ll discover in this show:

Alex started his first website in the late 1990s, back when email open rates were incredibly high. In 2005, he became managing director of Attractive People, a social network. In that role, Alex discovered what builds trust and how people behave on social networks.

Alex continued working behind the scenes in social media until 2015, when Twitter acquired Periscope for $100 million. After a company acquired his own app, Alex says he was curious about what a $100 million app could do. In March 2015 on the first day Periscope became available, Alex downloaded it and it immediately blew him away.

Alex knew that driving engagement builds trust and increased visibility; however, creating engaging content was (and is) a challenge. Periscope helped Alex solve the engagement challenge because he could start a one-to-many conversation from anywhere at any time. Alex says it’s still fascinating that you can reach so many people for free.

In the beginning, Alex directed his live videos with his employee as the Periscope star. They created fun content such as jumping in a pool, which had nothing to do with Alex’s area of expertise. After a few weeks, Alex’s business partners shared their concern that this fun content wasn’t professional, especially because Alex was COO of the company. Alex agreed that their point was valid, so he decided to change his subject matter.

With 10 years of experience in social media, Alex knew people would have questions about how to use this new platform. He decided to use his expertise to help people understand how to build their audience with live video.

I ask Alex to share a snapshot of his audience today. Alex says that in only two years, he’s built his audience from nothing to 230,000 followers and 55 million hearts on Periscope. Through cross-promotion, Alex has attracted a total of 400,000 followers on social media. To build that audience, Alex says his experience working in social media, building companies, and training people gave him the necessary expertise, but live video technology was also a critical gateway.

Listen to the show to learn about Alex’s first live broadcast on Periscope.

Alex says that even after doing more than 1,000 Periscope broadcasts, he still gets nervous. For Alex, three questions spin around in his head when he thinks about going live: “Who are the people watching me? Will they like me? What will I tell them?”

Alex has found that his viewers are regular people who are early live video adopters and curious about what he has to say.

When you provide something that’s valuable, Alex believes people will like you. He says the key is to educate, inspire, or entertain viewers.

As far as what to tell viewers, Alex believes people watching live video are always interested in five topics:

Retweet if you agree that livestreaming is key to success. #golive #wekhan pic.twitter.com/kHx6jOTeBO

Alex says that your live video doesn’t need to focus on only one of these five topics. You can share a personal story, segue to a sneak peek, and then have a giveaway. Alex says the topics work together seamlessly.

When I ask if Alex agrees that live video is the one medium where imperfection is okay, he says absolutely. Some people tune in because live video is new, and others because they want to see something go wrong, he laughs. However, Alex stresses that live video is truly appealing because it replicates the way people connect and talk to each other in real life.

Live video is immediate and authentic. If the video doesn’t go perfectly, that adds to…

The Art of Influencer Marketing For Solopreneurs and Small Business 0