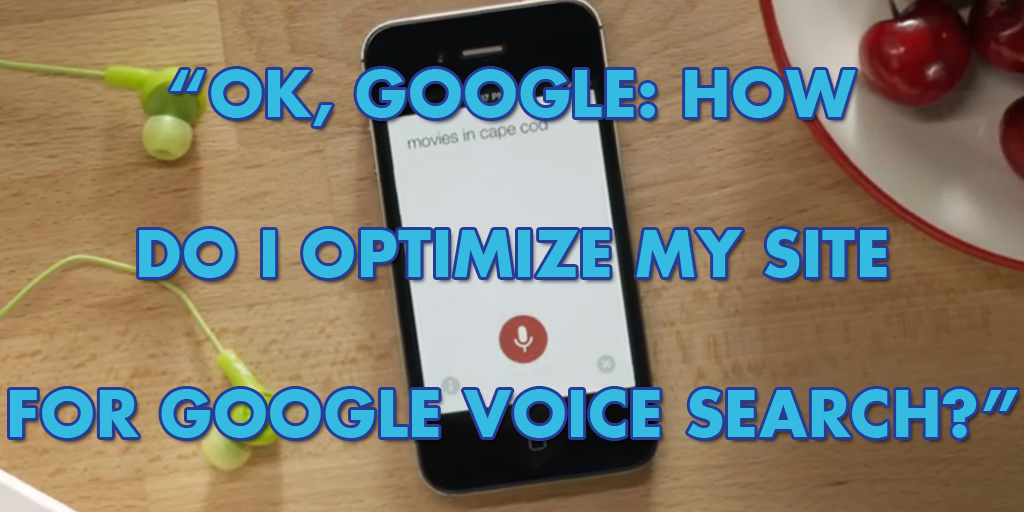 OK, Google: How Do I Optimize My Site for Voice Search?

How to Keep Your Computer’s Desktop Clean & Organized: 7 Helpful Tips
Facebook Tests Live Split-screen Broadcasts: This Week in Social Media
Google Is Shifting to a Mobile-First Index: What Marketers Need to Know to Prepare

“The destiny of Google’s search engine is to become that Star Trek computer, and that’s what we are building.”

This was what Amit Singhal, the head of Google’s search rankings team, famously said about the future of Google’s search technology during a conversation with Guy Kawasaki at SXSW Interactive in 2013. During the past decade, Google has taken several bold steps toward this lofty, ambitious goal, and one of the most exciting advances has been in the field of voice search and natural language processing technology.

Although Google’s voice search doesn’t feature the vocal talents of Majel Roddenberry as the Star Trek computer did in the show’s many long-running incarnations (yet – there’s still time to beat Apple to it, Google), it has become as close to its fictional inspiration as contemporary technology will allow.

However, there’s far more to Google voice search than mere convenience; it’s changing the way Google handles search queries, how users search for the information we need, and even our attitudes toward search engines in general.

In today’s post, we’ll be delving deep into what makes Google voice search so unique. We’ll be taking a quick look into the history of how Google developed its revolutionary voice search tech, before examining how its development has impacted Google’s wider approach to search. We’ll be looking at how businesses and marketers can develop content, ad campaigns, and strategies with voice search in mind. Finally, we’ll brave our own final frontier and speculate about what Google voice search might look like in the coming years – and the possibilities may not be as fantastical as they may once have seemed.

There’s a lot to cover, so grab a coffee and let’s get right to it.

What Is Google Voice Search?

Google Voice Search is a function that allows users to search the Web using Google through spoken voice commands rather than typing.

Google Voice Search can be used on both desktop and mobile searches. In some instances, users must say a “wake” phrase to tell Google to begin analyzing what the user says, which is “OK, Google.” This can be done either via a hands-free voice command on certain mobile devices and operating systems, or by tapping or clicking on the microphone icon to the right of the main Google search field:

Other than how users activate and use voice search commands, there’s very little difference between a spoken voice search and a regular typed search query. Even “near me” searches (more on this shortly) on desktop will be very similar to results for a similar query conducted by voice search on a mobile device.

Users are taken to a typical search engine results page whether they spoke their query or typed it, with a couple of potential exceptions. Users searching for directions to a place using a mobile device may see a different SERP than a desktop user searching for the same information, for example.

By and large, though, voice search queries often return similar – if not virtually identical – results as typed queries. It’s just a lot easier and more convenient to speak your query rather than type it.

Like many of Google’s most popular services, Google Voice Search (also known as Search by Voice) was born in Google Labs, the place in which Google engineers can play around with new technologies and ideas, many of which have become popular Google products such as Gmail.

First introduced in 2010, Google Voice Search initially required users to call a phone number from their mobile device, after which they were prompted by a recorded message to “Say Your Search Keywords.” The user would then say whichever keywords they wished to search for, which would then update an open webpage with results for their query, or offer users a link they could click to be taken to a search engine results page for their query. (Sadly for amateur internet historians such as myself, neither the original number nor the types of results pages it generated are available any longer.)

Admittedly, this wasn’t the most elegant solution, but it did pave the way for radical developments in speech recognition technology that Google utilized shortly afterward. In the subsequent years since Google Voice Search was launched, Google began integrating its voice recognition tech into many popular Google products, including Google Maps, its virtual assistant Google Now, and even the core of its underlying search engine tech.

Today, Google Voice Search is fully compatible with dozens of products and applications. More than that, voice search has become an integral part of the Google experience, and has even shaped how Google’s algorithms handle specific types of queries.

A couple of years ago, Google made one of the largest changes to its core algorithm in recent memory. This update was known as Hummingbird, and it changed… well, just about everything.

User intent is one of the most important fundamentals of search, yet for machines, it can be remarkably difficult to infer what users actually want when conducting certain searches. That’s among the many reasons why the Hummingbird update was so important – it signaled a shift in Google’s ability to determine intent behind relatively ambiguous searches and provide users with an even better experience, something Google continued with the development of its RankBrain machine learning system.

Say we conduct a voice search for the query “Zoe Saldana”, the actress known for her standout roles in the Avatar and Guardians of the Galaxy movies. (Note: these searches were performed using Google Voice Search on an HTC One device running Android v. 6.0 Marshmallow)

Now that we’ve established an initial search, we can put Google’s semantic understanding to the test by asking it a series of related queries that would be ambiguous and almost impossible to accurately “answer” by themselves.

Let’s say we want to find out the name of Saldana’s character in Guardians of the Galaxy. After being presented with our initial result, we can ask Google a series of further questions:

We can keep going – and even branch out into other lines of inquiry relevant to our initial search. This result was for the search query “What planet is Gamora from?” and the results pertain to the original character of Gamora from the Guardians of the Galaxy comic published by Marvel:

While Google manages to keep up with this type of sequential semantic search, it performs much more strongly when handling simple biographical information about real people, as opposed to fictional characters.

Going back to our original search for Zoe Saldana, we can ask Google a series of related questions without specifying who we’re talking about. Google “knows” we’re probably still interested in Zoe Saldana, and so it fills in the blanks in sequential voice searches:

The result above was served to me for the query “How old is she?” I did not specify I was interested in Zoe Saldana – Google “knows” that’s what I meant in this context, so it changed “she” in my query to “Zoe Saldana” as seen above.

Google also does this for another sequential semantic voice search. The figure below is the result for the query “Where was she born?” Again, Google interpreted my query to mean “Where was Zoe Saldana born?” which is what Google changes the search to after parsing my voice search:

This is a great example of semantic search in action, and one that suits the use applications of Google Voice Search perfectly. Sure, we could ask each of our subsequent questions in more complete sentences, but Google doesn’t “need” that clarification; it intuitively understands that each question is relevant to the one preceding it, and offers accurate, intelligent results based on very little user input.

It also provides users with a much more natural and intuitive experience, as semantic searches such as those above can be conducted in an almost conversational way, rather than forcing the user to conform to arbitrary conventions dictated by Google.

Google Voice Search, Google Now, and the Future of Search

Google Voice Search has been integral to Google’s virtual assistant, Google Now, for many years. The combination of Google’s powerful search algorithms with its sophisticated natural language processing (NLP) technology is why most people can agree that Google Now is significantly more accurate than Apple’s Siri, Microsoft’s Cortana, or Amazon’s Alexa virtual assistants, despite the latter three being very similar in function.

It can be tempting to think of Google Voice Search as a standalone product that exists in its own silo, but when you look at how Google’ range of products has developed in recent years, we can actually extrapolate what the future of search might look like several years from now.

Take cross-platform conversion tracking in Google Analytics, for example. Google has gone to great lengths to make it easier for advertisers and webmasters to identify both offline conversions and converted sessions that take place across multiple devices, and is even considering adding voice query data to the Google Search Console.

This is because Google knows better than anyone that in today’s multi-device media environment, the days of single-session, single-device conversion pathways are long gone. Similarly, the way we search for information has changed, and a one-size-fits-all approach to optimization is both short-sighted and completely impractical in today’s online environment.

Voice Search Queries on the Rise

As you can see, Google Trends data suggests that use…

The Future Of Work: Companies Use Marketing Tools To Create A Compelling Employee Experience 0