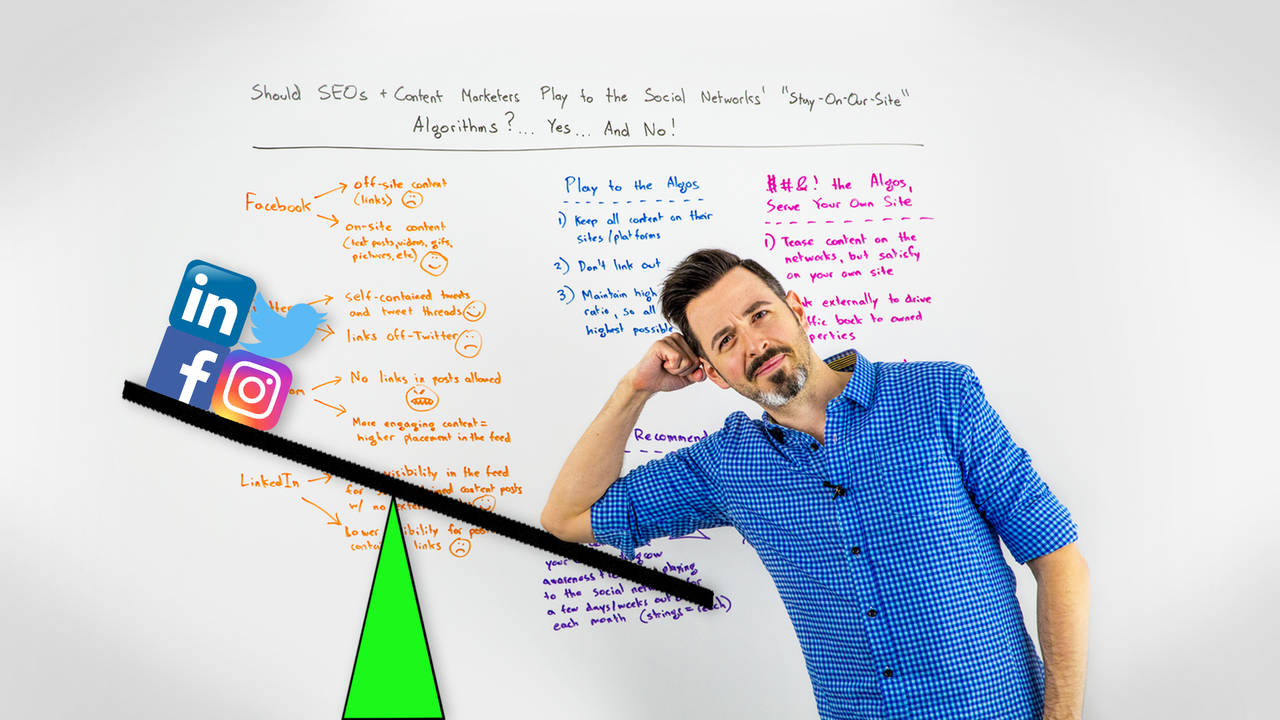 This week we're chatting about whether SEOs and content marketers, for that matter, should play to what the social networks are developing in their visibility and engagement algorithms, or whether we should say, "No. We're going to try and do things on social networks that benefit us." For example, if you see this video promoted on Facebook.com/Moz or Facebook.com/RandFishkin, it will do more poorly than if Moz and I had promoted a Facebook native video of Whiteboard Friday. In fact, Instagram has now just come out and said that they will show you content posts from people you're not following but that they think will be engaging to you, which gives influential Instagram accounts that get lots of engagement an additional benefit, but kind of hurts everyone else that you're normally following on the network. If it's a self-contained, sort of blog post-style content in LinkedIn that does not link out, it will do much better than posts that contain an external link, which LinkedIn sort of dampens in their visibility algorithm for their feed. So all of these sites have these components of their algorithm that basically reward you if you are willing to play to their algos, meaning you keep all of the content on their sites and platform, their stuff, not yours. Or you say, "Forget you" to the algorithms and serve your own site instead, which means you use the networks to tease content, like, "Here's this exciting, interesting thing. Social networks, I know it doesn't seem this way, but social networks come and go in popularity, and they change the way that they work. The same thing has been true generally on Twitter, on LinkedIn, and on Instagram. So, essentially, while I'm urging you to tilt slightly this way, I'm also suggesting that occasionally you should use what you know about how these algorithms work in order to grow and accelerate your growth of followers and reach on these networks so that you can then get more benefit of driving those people back to your site.

Increasingly, social networks are tweaking their algorithms to favor content that remains on their site, rather than send users to an outside source. This spells trouble for those trying to drive traffic and visitors to external pages, but what’s an SEO or content marketer to do? Do you swim with the current, putting all your efforts toward placating the social network algos, or do you go against it and continue to promote your own content? This edition of Whiteboard Friday goes into detail on the pros and cons of each approach, then gives Rand’s recommendations on how to balance your efforts going forward.

Click on the whiteboard image above to open a high-resolution version in a new tab!

Howdy, Moz fans, and welcome to another edition of Whiteboard Friday. This week we’re chatting about whether SEOs and content marketers, for that matter, should play to what the social networks are developing in their visibility and engagement algorithms, or whether we should say, “No. You know what? Forget about what you guys are doing. We’re going to try and do things on social networks that benefit us.” I’ll show you what I’m talking about.

For example, if you see this video promoted on Facebook.com/Moz or Facebook.com/RandFishkin, it will do more poorly than if Moz and I had promoted a Facebook native video of Whiteboard Friday. But we don’t want that. We want people to come visit our site and subscribe to Whiteboard Friday here and not stay on Facebook where we only reach 1 out of every 50 or 100 people who might subscribe to our page.

So it’s clearly in our interest to do this, but Facebook wants to keep you on Facebook’s website, because then they can do the most advertising and targeting to you and get the most time on site from you. That’s their business, right?

The same thing is true of Twitter. So it tends to be the case that links off Twitter fare more poorly. Now, I am not 100% sure in Twitter’s case whether this is algorithmic or user-driven. I suspect it’s a little of both, that Twitter will promote or make most visible to you when you log in to Twitter the posts that have been made or the tweets that have been made that are self-contained. They live entirely on Twitter. They might contain a bunch of different stuff, a poll or images or be a thread. But links off Twitter will be dampened.

How the Brain Processes Different Types of Content [Infographic] 0

How Data Insights Can Lead Your B2B Content Marketing Strategy 0

What Influencers Want Businesses to Know 0