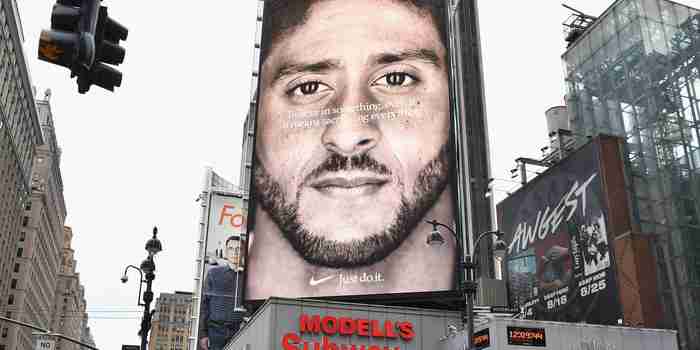 The athletics-gear company also saw hefty gains in sales revenue throughout the month. The marketing campaign reinvigorated the controversy around Kaepernick's protest and the issues behind it. With so much heat surrounding Kaepernick, why would Nike take such a gamble on its 30th anniversary ad? Pepsi and Nike addressed related issues, yet Pepsi's version was a miserable public failure. Pepsi chose pop-culture figure Jenner, a white woman born into family wealth and celebrity. A good share of his supporters are young, liberal-minded individuals -- many of them people of color. Two months later, the NFL enacted a new policy that all players on the field must stand for the national anthem or be subjected to penalty fines. From a branding perspective, the Kaepernick ad was a golden opportunity for Nike to cement its values. He hasn't played in the NFL since. In the process, you'll solidify your company values in a big spotlight.

How The Enthusiast Network Became the Top Auto-related Video Content Brand in the US
Funnel Metrics, Attribution, and Measuring Marketing ROI in Any Industry: Christine Vermes on Marketing Smarts [Podcast]
Playing for Keeps: How Brands Should Use Gamification

The initial outrage cost Nike some customers but sealed its relationship with a much larger, and growing, customer base.

Nike sent shockwaves around the world in a matter of minutes with its 30th anniversary ad campaign. Television commercials, print and digital pieces featured Colin Kaepernick, a former quarterback for the San Francisco 49ers. During the 2016-2017 season, the NFL star famously used his public platform to make a bold statement against racial injustice and police brutality: He knelt as the national anthem played before each game.

The act was a form of protest, and it generated great controversy. Political leaders and spectators responded in force. Some boycotted the NFL altogether, and many of them haven’t returned. Voices from the business world joined in, too, commenting on what other brands — and the NFL is a giant — could learn from the ordeal. The league’s ratings took a dive in that first season, when Kaepernick was actively protesting. Later, as Nike released its anniversary campaign, many industry watchers predicted that Nike’s stock could see a similar effect.

As it turns out, Nike’s stock reached an all-time high by mid-September. The athletics-gear company also saw hefty gains in sales revenue throughout the month. The marketing campaign reinvigorated the controversy around Kaepernick’s protest and the issues behind it.

A little more than a month later, a few key takeaways have emerged as branding lessons for the rest of us.

Kaepernick’s protest season was polarizing because it activated two bases. First, it fired up people who claimed he was disrespecting the American flag and those who serve in military. Second, it rallied those who saw a need to defend the First Amendment right to expression through peaceful protest.

With so much heat surrounding Kaepernick, why would Nike take such a gamble on its 30th anniversary ad?

A certain degree of risk is inherent when a brand approaches any sort of public controversy. But there’s a right way and a wrong way to get involved. Remember Pepsi’s infamous Kendall Jenner protest ad, which was pulled roughly 24 hours after it first aired? Pepsi and Nike addressed related issues, yet Pepsi’s version was a miserable public failure. Contrasting analysis abounds online: Articles about the Pepsi debacle advise brands to stay out of politics and focus instead on cultural trends, while posts on Nike’s campaign encourage brands to affirm their values by taking a stance.

The crucial difference between these two ads? Relatability and alignment. Popular figures or influencers must have a real connection to the issue at hand.

Pepsi chose pop-culture figure Jenner, a white woman born into family wealth and celebrity. Many viewers were turned off by the incongruency of Jenner as a stakeholder in the movements against police brutality and racial injustice.

Experts Dish Instagram Ad Tips to Save You Major Embarrassment 0

Understanding the Instagram Algorithm: 7 Key Factors and Why the Algorithm is Great for Marketers 0