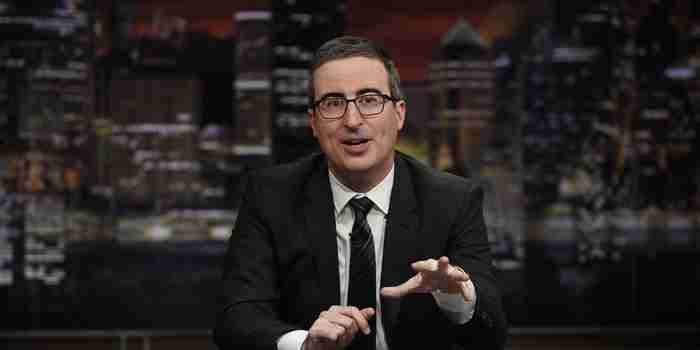 The Lessons, Surprisingly, That Marketers Can Learn From John Oliver’s ‘Last Week Tonight’

It makes complex topics fun while calling viewers to action. The audience laughs. Viewers may learn something, but mostly they laugh and forget what was said by the next day. For a follow-up segment, Oliver created his own website, www.gofccyourself.com, to route commenters more easily to the FCC comment page. Specifically, Oliver announced the release of a competing book, A Day in the Life of Marlon Bundo. The book is creative, and humorous, and comes with a call to action cleverly disguised as part of the content itself. Oliver’s show illustrates the value of using compelling content to promote the messages that are important to your brand. The following examples of brand marketing capture elements of what makes the show so successful. In contrast, Jimmy Fallon, host of The Tonight Show, has made every effort to stay out of politics and make a show that will make everyone laugh. Related: What You Can Learn From the Viral Shenanigans of Last Week Tonight With John Oliver These brands -- like Oliver, Patagonia and Nike -- are doing work that breaks the mold, and goes far beyond what’s expected of them, much the way Oliver’s show does.

5 Analytics Tools to Supercharge Your Marketing Strategy
Beyond Nostalgia: How Brands Can Leverage the Powers of ‘Fauxstalgia’ and ‘Newstalgia’
5 Tips to Improve Your Local SEO in 5 Hours

The comedian’s biting political commentary offers a lesson in authenticity for marketers who want to level up their brands.

As a marketer, how do you cut through the noise and drive attention to your brand in a genuine way? Some marketers buy backlinks. Some hire people to create for them 10,000 Pinterest accounts that all share the same junk infographic. Some do reciprocal link exchanges.

But none of these actions are useful to the reader or customer. There’s no added value, and no organic conversation happening.

In order to learn how to build an audience in a genuine, passionate and engaging way, look no farther than your television screen. (Though you may need to poach your mom’s HBO password.) To master that specific skill on how to stand out from the pack, check out what’s happening on Last Week Tonight with John Oliver.

Yes, Last Week Tonight: The program actually has an outsize impact because it starts a conversation with its viewers. It challenges them to think. It makes complex topics fun while calling viewers to action. Here’s how it works — and what you can learn from it.

Certainly there are other late-night news satire shows. They make jokes about the outrage of the day, whether it’s politically allied to the right or left. The audience laughs. Guests plug their books and movies. Viewers may learn something, but mostly they laugh and forget what was said by the next day.

Last Week Tonight has a different approach to news satire. Oliver, the host, tells jokes, but also assumes his viewers will stay with him long enough to absorb complex concepts. Oliver does more than spoof; he puts ideas together in a way his audience can’t find anywhere else. This is what makes his commentary indispensable and memorable.

Perhaps one of Oliver’s biggest influencer moments (in terms of its relevance to entrepreneurs) was on the topic of net neutrality. Even as the FCC considered rolling back the rules that force ISPs to treat all internet content equally, Oliver issued his own call to action for viewers to leave comments about the rule on the FCC website.

For a follow-up segment, Oliver created his own website, www.gofccyourself.com, to route commenters more easily to the FCC comment page.

His viewers responded to the call. So many tried to leave comments that they crashed the FCC website, leading to an investigation of what the government initially thought was a denial of service attack. Oliver’s campaign was not successful in convincing the FCC, which subsequently got rid of net neutrality, but he did educate millions of Americans about an arcane yet important topic.

Another keystone moment on the show came in response to the release of Vice President Mike Pence’s wife and daughter’s picture book about their pet rabbit, Marlon Bundo….

Loading...
Newer Post
No, Video Isn’t Dead — It Still Boosts Sales Conversions When You Put It on the Right Pages of Your Site
Older Post
Why Personalization and Segmentation Are Email Marketing’s Saving Grace

Are the Videos you Watch Dictated by AI? 0

Keeping Up with Social Media: How to be Number One Like a Kardashian/Jenner 0