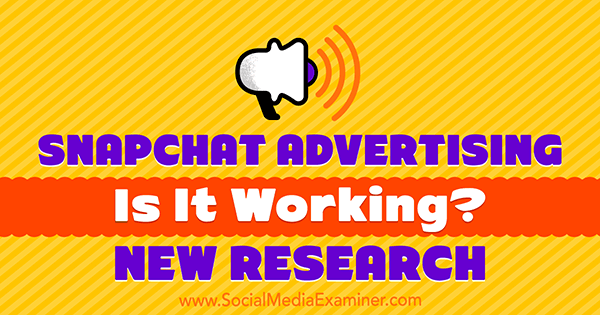 Author: Michelle Krasniak / Source: socialmediaexaminer.com Thinking of advertising on Snapchat? Wondering if others are finding Snapchat

What Can Modern Marketers Learn From Advertisers of the Past?
3 Ways to Use Instagram Stories Ads for Business
Snap Inc. Opens Advertising Opportunities to SMBs

Thinking of advertising on Snapchat?

Wondering if others are finding Snapchat ads effective?

In this article, you’ll discover new research that sheds light on whether advertising on Snapchat is worthwhile for businesses.

Advertisers must be able to serve highly targeted ads to audiences to accomplish their goals. Facebook’s (and therefore Instagram’s) ads platform is one of the most robust of all social networking platforms because of the vast amount of user data that Facebook has access to. Without user data to reference, marketers are throwing darts in the dark, hoping to hit the dartboard at some point.

Last September, Snapchat rolled out the ability for advertisers to upload their own user data to employ in targeting users. This was called Snap Audience Match, and while it was a step in the right direction, Snapchat included giving users the choice to opt out of these targeted ads. (Users can choose not to be served targeted ads only; general ads will still show up in their feeds.)

Another important advertising feature that Snapchat is lacking (natively) is the ability to measure the effectiveness of ads. While Snapchat partners with a few companies to provide advertisers with such important data, they still don’t have the ability to gather it internally.

Now that Snap, Inc. (SNAP) is a publicly traded company, the pressure for monetization has increased exponentially. eMarketer recently reported dismal ad revenue numbers for Snapchat in comparison to Facebook and Google. While the two “veterans” have time and experience on their side, the comparison shows how much ground Snapchat must make up.

The pressure is now on Snapchat to increase its appeal to advertisers. How will it do that? Joel Wright, president and co-founder of #HASHOFF, the micro-influencer marketing platform, speculates that Snapchat will turn up the dial on its analytics offerings and focus on data collection and measurement. He added the lack of those offerings plays a large part in advertisers’ reluctance to jump on board.

Social influencer marketing has the attention of advertisers and with good reason. Consumers have always looked to family and friends for product recommendations, and with social media, people have access to a virtual world full of opinion-givers.

In the last year alone, several companies have come on the scene whose sole service offering is matching advertisers with influencers. It’s become a big business and experts predict it’s only going to get bigger.

Snapchat Analytics: How to Measure Your Brand’s Efforts on the App 0