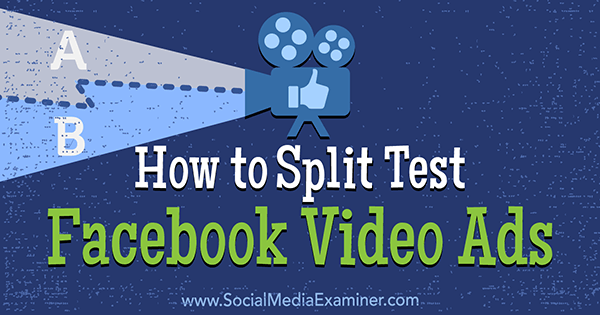 How To A/B Test Ads In Google Ads
Why Do Insurance Companies Advertise So Much?
Don’t Be Overwhelmed by Facebook Advertising: 10 Tips to Use Any Time

Do you want more views for your Facebook video campaigns?

Split testing different variations of video ads will help you identify the content that resonates best with your Facebook audience.

In this article, you’ll discover how to split test Facebook video ads.

#1: Decide Which Variable to Split Test

Split testing (or A/B testing) is the practice of testing multiple versions of one variable to find out which performs best.

To create a video variation, start with a copy of your original video and then make a slight change to the copy. You can then run both videos as ads with the same setup (the only variation is the change you made in the video) and see which performs best for a given objective. You can test a number of variables, including:

You can’t test everything at once, but over time, you can run a variety of tests, track results, and use these insights to inform your video strategy moving forward.

Where do you start? Well, most types of video split tests fall into five categories: visual, text, audio, length, and format variations.

Visual variations involve swapping out or reorganizing the video clips or photos in your video. For example, WV Skydivers, an adventure company in West Virginia, created the following variations for a Facebook test. One variation begins with a photograph and the other begins with a video clip.

Looking to test visual variations in one of your videos? Try some of these tactics: swap out a photo for a video clip (as in the example above), change the order of clips (especially the clip that appears first in your video; the first 3 seconds are most important for capturing viewers’ attention), or show different subjects or framing in your video.

With text, you can test the amount of time text appears on the screen, copy or script variations, calls to action (CTAs), text design (including colors, fonts, and backgrounds), and more. Don’t have time to make a second video? You can also do a split test with the same video using two different text titles and descriptions.

While the majority of people watch Facebook videos with the sound off, you may decide to test some audio variations for those who are listening. Test different songs, voiceover actors, or voiceover script variations.

Shorter videos often perform better than longer ones, so testing length can be interesting as well. In the example below, Rescue Chocolate tested a 15-second version of a video ad against a 30-second version of the same ad.

Finally, you can test the video format or aspect ratio. For example, see how a landscape version of your video performs against a portrait or square video.

Once you’ve decided which variation to test and created your videos, here’s how to set up your test on Facebook.

Next, choose the objective of your campaign. Do you want to drive video views? Engagement? Conversions? You can choose from a variety of objectives in three categories: Awareness, Consideration, and Conversion.

Once you’ve selected an objective, you’ll be asked to name your campaign. Choose a name that will make it easy to remember your objective and the split test you’re running. This will be helpful…

This Marketing Strategy Might Revolutionize the Industry the Way Email Did. Here’s How to Get Ahead of the Trend. 0

What Are Email Whitelists, & How Do You Get On Them 0